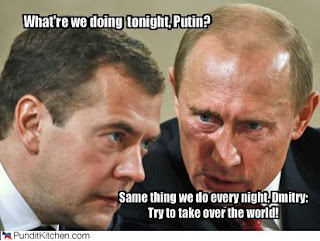 You may have heard that Romney referred to Russia as America’s “number-one geopolitical foe” and plans to double down on this rhetoric during his big speech in Poland.

The speech on the “values of liberty” at Warsaw University on Tuesday is expected to seek to rekindle the flames of US cold war righteousness by featuring a strong attack on Russia and President Vladimir Putin’s rollback of democratic gains, while also criticising the US president, Barack Obama, for allegedly sacrificing the interests and security of central European democracy in favour of realpolitik with the Kremlin.

Romney has previously described Russia as America’s “No 1 geopolitical foe”, in contrast with Obama, who has sought to press “the reset button” in relations with Moscow.

I’ve seen a lot of speculation to the effect of “WTF” “what is this all about?” Here are some possible (non-exclusive) answers: