I didn’t watch the Republican Convention last night, because I’m not getting paid to do so. I understand that conservatives think it was a hit and liberals a travesty, although the Romney-Ryan campaign’s invocation of AC/DC to prove their cool guy credentials strongly suggests the latter.

So it wasn’t until I read Kevin Drum’s blog post this morning that I saw this section of Congressman Ryan’s speech:

College graduates should not have to live out their 20s in their childhood bedrooms, staring up at fading Obama posters and wondering when they can move out and get going with life. Everyone who feels stuck in the Obama economy is right to focus on the here and now….None of us have to settle for the best this administration offers — a dull, adventureless journey from one entitlement to the next, a government-planned life, a country where everything is free but us.

To this, I have an emotional and an intellectual reaction. The emotional reaction goes like this: 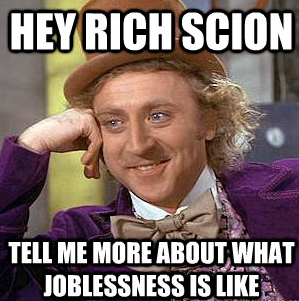 My intellectual reaction is more subtle. House Republicans have done everything they can to make my generation jobless and hopeless by cutting support for student loans, slashing funding for higher education, and refusing to raise taxes, so how dare the global-warming-denying, deficit-spending-for-the-old-and-sick but not the young-and-promising, job-killing, rape-denying legislative wing of the Wisconsin Taliban tell me that it’s Obama’s fault?

I sometimes imagine the House GOP getting together and singing their version of the Stonecutters’ Song:

Who sends you to combat zones?
Who cuts all your student loans?
We do, we do.

Who wants to turn Earth to Mars?
Who hates all electric cars?
We do, we do.

Who hates taxes for the rich?
Who tells the poor life’s a bitch?
We do, we do.

It’s so telling that Paul Ryan’s version of a boot trampling a human face, forever, is an unemployed college graduate. Not a single mother who could never finish college. Not an army veteran who was left hobbled by injury. Not even a fifty-something dad trapped between supporting his parents and his children. No, the worst that Paul Ryan can conjure up is a rhetorical version of Failure To Launch.

And what does Ryan propose? The usual. Maybe we’ll voucherize this or privatize that. But for an allegedly sophisticated policy-maven ideas’ man, Ryan is so intellectually thin that he’s the Kate Moss of innovation: pretty from one angle, insubstantial from any other. How would a Romney-Ryan administration address joblessness among twenty-somethings? Presumably they’ll wave their tax stick at the economy and ignite a fire of innovation that will create a tide that lifts all boats; more likely, their administration would play out like a slightly more cheerful version of the W. Bush years, in which employment and wages stagnate for everyone whose parents didn’t own large corporations.

The future’s so bright, I gotta wear shades.