Morning Link, with Commentary, on the Shrinking Place of Theory in Sociology and IR 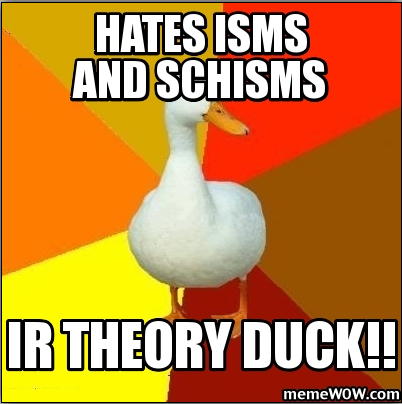 I’m crashing on multiple deadlines, so in lieu of “morning linkage”….

Last night I was in a twitter conversation with Phil Arena and Kindred Winecoff about Fabio Rojas’ recent post at orgtheory.net concerning the incredible shrinking vocation of social theory.

Roja’s observations echoe themes that we’ve been talking about at the Duck, both in print and in PTJ and my 10 August 2012 podcast (m4a). After quoting Kieran Healy’s excerpt from his grad-level sociological theory syllabus — about the incredible shrinking character of social theory — Rojas argues that:

Final comment: I’ve now spent 9 years between IU and Michigan as faculty and post-doc. Very different departments, but that allows you to see the wide range of sociology. I’ve looked over (and tried to read) *hundreds* of job applications. Very, very few “pure theory” applications. What does that tell me? From time to time, you’ll the fat theory book come out, but the profession collectively says “meh.”

I agree with the correlational analysis, but not the mechanisms. Rojas’ provides the “standard story” but his arguments are about functional efficiency when they should be about sociological forces operating within, across, and upon various social scientific disciplines. To name just a small one: when the safest route to acquiring social capital is to invest heavily in technical knowledge, that trades off with the investments necessary to be good consumers and produces of social (or, in our case, international) theory.

I also think that theorists in International Relations have become worse at explaining why the field should pay attention to what they have to say. In that sense, “international theory” is the victim of its own two-decades long flourishing, during which time it became less important to demonstrate the downstream implications — positive and negative — of different ways of conceptualizing the ontology of world politics.

And that leads to another comment. Kindred said the other night that we need more “big think” in IR, especially in light of the decline of the traditional “paradigms.” A number of people agree, but it isn’t clear what that would like it, let alone how it would be packaged and presented current tastes and reviewer expectations.