A Note on Newspaper Endorsements 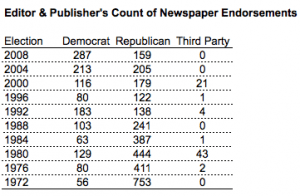 Last year Nate Silver posted numbers going back to 1972. Bottom line: for Obama and Romney to be running roughly even at this point tracks with 2004–and represents an improvement for the Democrat over most pre-2004 cycles.

Obama picked up a number of normally Republican-endorsing pages in 2008, which tracks with the general revulsion against the Bush era that swept the country that year. The fact that many of those pages are switching back looks more like a “reversion to the mean” than anything else.

This also tracks with an important point about the “mainstream media”: owners and editorial boards are not necessarily liberal.