The Right to Mindlessly Look at You-Tube Videos

Happy New Year!  I hope you are still enjoying a wonderful break.  The holidays for me always mean one thing: a lack of Internet access.  As a duck-ling who is from Deliverance/mayonnaise/4-H country, I’m particularly attuned to the argument UN Human Rights Council Special Rapporteur, Frank La Rue, made a couple of summers ago about the human right to Internet access.  Of course I need unrestricted access to my favorite websites – how else am I supposed to procrastinate/ignore in-laws!  But, is Internet access really more than that?   Like La Rue contends, could the Internet actually be an “an indispensable tool for realizing a range of human rights”?

(Read below to find out)

According to some recent research I’ve done both for my book manuscript and as part of a co-authored project, I think La Rue was on to something.  The Internet is a crucial forum through which individuals can connect internationally and demand their rights.  It matters even for the most basic, non-derogable rights, like freedom from torture and political killings.

Human rights organizations, for example, don’t have to have an active presence within a country for changes to be made; with the Internet, domestic populations can join in the larger human rights movement, even when their freedom of association is restricted domestically.  A great example of this occurred when a domestic advocate from Bahrain, forbidden from associating or traveling outside her state, Skyped-in to her presentation at an international advocacy event during a recent UN Human Rights Council meeting.  On the large scale, the quantitative findings in my book manuscript support this contention – the effect of human rights organizations on a government’s respect for physical integrity rights is conditioned by a population’s access to international information, including access to the Internet.  See a nifty graph of that idea here (click on it to enlarge): 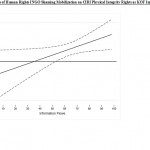 Further, the Internet serves as a coordination device for those with grievances.  According to coauthored work with Sam Bell (Kansas State) and David Cingranelli (Binghamton University), the Internet can even serve to heighten domestic anti-government violence.  (Please email me for a copy of this forthcoming piece).

Anyway, La Rue’s contention of a human right to the Internet met some ridicule; after the Arab Spring, some commented that the role of the Internet was overstated.  Like La Rue’s recent statement to civil society groups, however, my research would contend that the Internet can be a powerful “enabler” of even the most basic of human rights, even if not a full-blown right in and of itself. So, I shouldn’t feel guilty about my Internet surfing, except perhaps I need to still steer clear of mindless You-Tube videos.