Blog Archeology: The Discursive Bundle that Justified the Iraq War

Yesterday morning I forgot to link the National Security Archive’s “Iraq War Ten Years After” page. It highlights some of the greatest hits of the period. I founded the Duck after the start of the Iraq War, but, as was the case for many US political and international-affairs blogs, the team blogged a fair amount on the subject.

Given Jon’s recent post, I thought I’d dredge up an old one that I wrote on the framing of the Iraq War. Given how recent apologias have emphasized certain aspects of pro-war rhetoric, such as the call to democratize Iraq, I think it remains relevant.

Bill recently argued that, contra left-wing grumbling, the Bush administration has consistently embraced democratic enlargement as an element of its grand strategy. His post struck a nerve with some commentators, generating the kind of debate I hope happens more often as the readership of this blog expands. I want to shift the debate a little bit towards the issue of “framing.”

George Lakoff’s arguments about political framing have become a hot topic among liberal and left-wing bloggers. Many embrace Lakoff’s work. They believe that one of the major problems for “the left” in general, and the Democratic party in particular, is the degree to which it has been “out framed” by the Republicans. A number of prominent Democratic bloggers and pundits are less convinced. Noam Schieber, for example, argues that the problems of the party cannot be fixed by finding better “buzzwords.” A full disclaimer: I haven’t read either of Lakoff’s two books on the subject, but the public discussion of Lakoff does seem to focus on buzzwords. This isn’t surprising, given the most frequently touted example is the “death tax.” The gist of the example is that conservatives built opposition to the estate tax by calling it the “death tax.” The phrase “estate tax” invokes a “frame” of taxing wealth (wealthy people have “estates,” which we think of as large tracts of well-manicured land with a castle-like building), while “death tax” invokes a frame of taxing “death” (we all die, most of us don’t look forward to it, so it seems unfair to penalize people for dying). This is a fairly stilted understanding of framing. Erving Goffman’s seminal work, Frame Analysis, for example, used frames to refer to basic cognitive orderings of the world. Social movement theorists, in contrast, tend to focus on framing as a form of discursive intervention in which actors seek to represent something in a strategically advantageous ways. This does sound like “popular” Lakoff, but framing is really more complex than choosing labels that invoke pre-given association.

One way that scholars understand framing is a process whereby actors weave together a set of arguments, concepts, and associations – with the goal of linking them into a broader narrative suggesting a particular course of action. Thinking about framing in this manner helps us to understand, I think, why the Bush administration’s supposedly changing justifications for the Iraq War (from WMD to democratization) strike liberals and left-wingers as an act of duplicity, but do not necessarily offend other people. The key issue is that the Bush administration framed Iraq in a particular way, one which many liberals and progressives never accepted. Bill captures it pretty well in his post. If you look back at a lot of the major speeches and statements by Bush administration officials leading up to the Iraq War, you’ll see a fairly consistent set of causal logics and associations. The frame in question logically implies that the way to (1) reduce the threat of terrorism, (2) prevent terrorist use of WMD, and (3) prevent non-terrorist WMD attacks against the US is to engage in regime change. Put more simply, tyrannical regimes are the root problem, terrorism (and related threats) are a symptom. Indeed, tyrannical regimes are, by definition, terrorist regimes. Take, for example, Bush’s speech announcing the imminent onset of the war:

Peaceful efforts to disarm the Iraqi regime have failed again and again — because we are not dealing with peaceful men.Intelligence gathered by this and other governments leaves no doubt that the Iraq regime continues to possess and conceal some of the most lethal weapons ever devised. This regime has already used weapons of mass destruction against Iraq’s neighbors and against Iraq’s people. The regime has a history of reckless aggression in the Middle East. It has a deep hatred of America and our friends. And it has aided, trained and harbored terrorists, including operatives of al Qaeda…. Today, no nation can possibly claim that Iraq has disarmed. And it will not disarm so long as Saddam Hussein holds power…. Many Iraqis can hear me tonight in a translated radio broadcast, and I have a message for them. If we must begin a military campaign, it will be directed against the lawless men who rule your country and not against you. As our coalition takes away their power, we will deliver the food and medicine you need. We will tear down the apparatus of terror and we will help you to build a new Iraq that is prosperous and free. In a free Iraq, there will be no more wars of aggression against your neighbors, no more poison factories, no more executions of dissidents, no more torture chambers and rape rooms. The tyrant will soon be gone. The day of your liberation is near…. As we enforce the just demands of the world, we will also honor the deepest commitments of our country. Unlike Saddam Hussein, we believe the Iraqi people are deserving and capable of human liberty. And when the dictator has departed, they can set an example to all the Middle East of a vital and peaceful and self-governing nation…. The United States, with other countries, will work to advance liberty and peace in that region. Our goal will not be achieved overnight, but it can come over time. The power and appeal of human liberty is felt in every life and every land. And the greatest power of freedom is to overcome hatred and violence, and turn the creative gifts of men and women to the pursuits of peace.

Here is a back-of-the-envelope diagram: 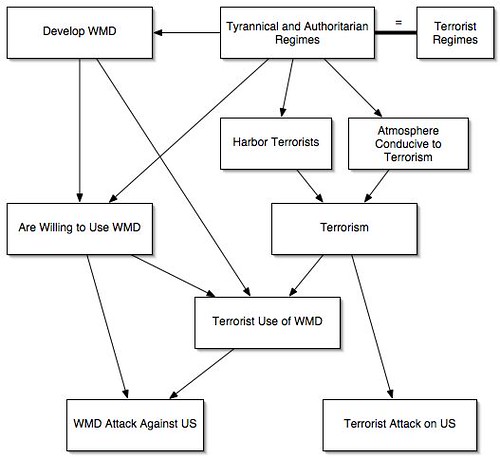 The Bush administration’s speeches on Iraq, in this light, served to create and reinforce this frame in public consciousness. They also represented Iraq as a subset of a general case. Diplomats may have had to present Iraq as sui generis when they were asked to defend contradictions in US policy arising from our failure to target other regimes, but the main thrust of the frame described Iraq as an exemplar of the general connection between the “war on terrorism” and democratic enlargement. Iraq was more pressing than other cases, but that was a matter of degree. For those who buy the frame in its entirety, the “shift” in public justifications for the war is nothing of the sort.

Moreover, the frame can easily survive the inconvenient facts that Iraq neither (1) had weapons of mass destruction nor (2) was a major safe have for terrorism. The frame makes it easy to slide between different causal narratives, and even if those lose some plausibility the underlying policy prescription is reinforced by drawing a conceptual equivalency between, for example, tyrannical leaders (particularly of Hussein’s “type”) and terrorism. (For what it’s worth, I think that conceptual equivalency makes some sense: terrorism is a strategy used by both state and non-state actors as a way of accomplishing various objectives. Nonetheless, the US does officially define terrorism as activity by non-state actors, and the association in the frame derives its power not from this analytical point, but from a conceptual linkage between Iraq under Hussein and Al-Queda.)

UPDATE: Peter Howard has some additional comments on the issue.