The “Israel Lobby” and the Nixon Administration

Editor’s Note: This is a guest post by Eric Grynaviski, who is an Assistant Professor of Political Science at George Washington University.

When Mearsheimer and Walt wrote the Israel Lobby, I was skeptical. I bought the argument that supporters of Israel influenced US policy, but because I am not a realist, I did not buy the argument that this necessarily deflected the US from pursuing specific policies during the cold war or afterwards. The primary reason for my skepticism was the evidence: because of how recent US support for Israel is, there are few archival documents that have been opened that show the extent of the ‘Israel Lobby’s’’ influence. This is compounded by the book’s focus on recent episodes, like Iraq, where there are few available documents. And, as many have argued, it’s unclear whether Israel exerts more influence than other lobbies in the United States.

While doing research for a book that is will come out with Cornell next year about the US-Soviet détente, I read the recently released Foreign Relations of the United States volume on the 1973 war. This is a very important case for the Israel Lobby argument because there was a lot of political organizing around Jewish-related issues, especially Soviet restrictions on Jewish emigration, featuring one early episode for organized lobbies in the United States pressing an administration over Israeli security issues. In the language of case selection, it is a ‘hard’ case for the Israeli lobby argument because the ‘lobby’ was only beginning to become an organized political force in Washington.

My reading of the volume is that it provides some direct evidence of the influence of pressure from the Israel lobby on US policy, bearing out not only the Israel Lobby argument but more generally the importance of domestic politics to Nixon’s foreign policy.

Below are excerpts from four documents released as part of FRUS, recounting different statements made by Nixon and Kissinger about political pressure brought to bear and how they saw it organized. 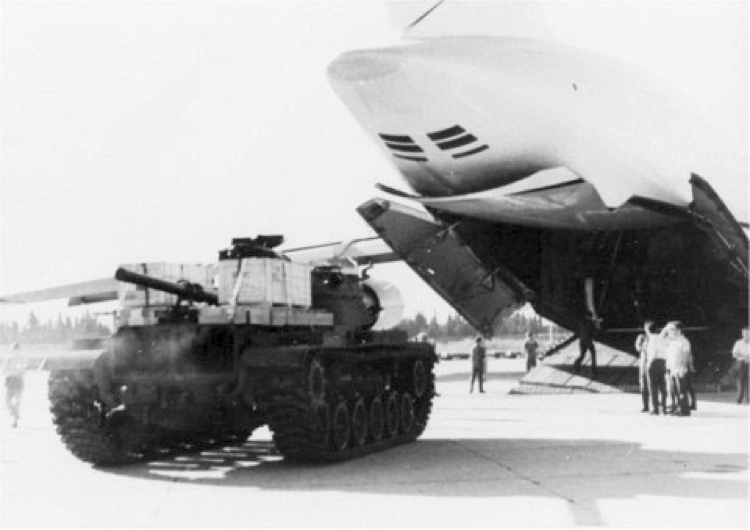 Early in the war, Nixon had authorized an airlift to resupply Israeli forces, but there was a delay in getting the flights organized because charters were difficult to find. On October 12-13, around midnight, Dinitz comes to Kissinger to tell him that Israel cannot conduct an offensive because of a lack of weapons: he needs to start the airlift. Kissinger picks up the phone while Dinitz contines:

So help me, there will be a mutiny here if there are no planes. The Jewish community, and many friends, and the labor movement and the press. I’ve been making no comment. I can’t do it. I have no right, not historical right; we are dealing with the destiny of the people. (461)

Kissinger waves Dinitz silent because he is talking to Schlesinger, the Secretary of Defense and he wants to keep Dinitz presence secret from Schlesinger. After chewing out Schlesiner, even claiming at one point he was intentionally slowing the resupply operation, Kissinger hangs up the phone telling Dinitz:

Kissinger: [hangs up, turns to Dinitz]: They’ll give you ten C–130’s immediately, and will load them with ammunition. And probably fly them with American pilots.

I am not aware, at least in the context of the Nixon administration, of another case where an ambassador listens as one cabinet member chews out another in the presence of a foreign ambassador, especially after a direct political threat.

Interestingly, Kissinger did not believe the resupply was important. Talking to Schlesinger the next day, Kissinger says:

JS: Okay,. Well they simply cannot be that short of ammo, Henry. It is impossible that they didn’t know what their supply was—and suddenly they’ve run out of it.

K: Look, they have obviously screwed up every offensive they’ve conducted. And they are not about to take responsibility themselves. I have no doubt whatever that they are blaming us for their own failures.

A few days earlier, Kissinger was meeting with Dinitz and said he was going to mention trade with the Soviets in a speech. The issue was that there was extensive lobbying to tie trade with the Soviets to issues concerning Jewish emigration. Kissinger is arguing in this snippet that the US wanted to ensure Soviet compliance with the US position on the war, and wanted to use trade as a sweetener, but he worried that the “Jewish League” would attack him.

At any rate we are warning them [the Soviets] against any action and I am giving a speech tonight in the Pacem in Terris conference and I am making two pointed references that détente cannot survive irresponsible actions. In one context I mention specifically the Middle East. I am going also in this speech to mention our MFN position and I hope to God this is not a week when the Jewish League will start attacking me on this position.

Dinitz replied by asserting some degree of control over Jewish pressure on the Nixon administration:

To a degree I can speak in the name, that I don’t think it will happen this week in any way. (371)

Here, Kissinger at least is afraid of the “Jewish Lobby” undermining support for his carrot and stick strategy that was part of détente, where he intended to use trade incentives to cajole the Soviets into supporting US positions. (See Garthoff’s Détente and Confrontation for this strategy). This fear was not unrealistic: conservative pressure led to restrictions on MFN that led the Soviets to back out of the negotiations.

Statements about the Jewish Lobby:

Nixon and Kissinger also frequently cite the “Jewish Lobby” as undermining support for their foreign policy priorities. In one provocative conversation between Nixon and Kissinger on October 11 (sounding like quintessential dramatic Tricky Dick):

N: The thing I wanted to say was this. In following this strategy I want you to lean very hard on the Israeli Ambassador that I am very distressed about these stories and I have information—I am talking to the press people—it is not coming from him but from lower level people who are putting out the line that we are not supporting Israeli. I will not tolerate this and if I hear any more of this I will hold him responsible. Will you tell him?

N: You and I know that Israeli is not losing this war but we cannot fight both sides. If we hear any more stuff like this I will have no choice domestically except to turn on them. I can get the names of these people (437-8).

In contrast to the claims of Mearsheimer and Walt, though, there is some evidence that Nixon and Kissinger thought they might be able to manipulate the Lobby to the benefit of US security policy. During this period, Nixon sought money for operations in Cambodia that were opposed in the Senate. By linking aid to Cambodia to aid for Israel during the war, Kissinger hoped to enlist the lobby to support his Vietnam policy.

Clements: We will need a supplemental.

K: Let’s get the Jewish lobby to get us the money. And let’s wrap some other things in it too. Go see (Senator) Ribicoff. ….

K:Yes and don’t be modest. They have been screaming for it—let (Senator) Jackson put it through. And get Cambodia taken care of in the package. It’s an absurdity that we have to lose our war. If we had put one F-4 into Cambodia they would have screamed bloody murder. (534)

The next day, Kissinger, suggests 3 billion for Israel and 500 million for Cambodia. On the linkage between funding for both, K remarks:

I’d like to see some of these great patriots [Senators] put to the test. …. I’ll tell (Israeli Ambassador) Dinitz to turn loose his Senators. I’ll tell him it’s a package deal. If we can’t get something for others, we will drag our feel on Israel. (555)

Now, Nixon and Kissinger were crazy, and often overestimated the political forces set against them, in particular because of Nixon’s anti-Semitism. Although in this case they may have been right to be concerned about pro-Israeli sentiment, and Nixon’s ‘personal’ relationship with Israel was always more complicated than simple accusations of anti-Semitism really allow. But, I think these archival documents pretty clearly provide direct evidence that Nixon and Kissinger were influenced by at least their perception of the Lobby’s influence. And, at least for Nixon and Kissinger, I am unaware (after reading quite a bit about the administration) of another lobby exercising the same inordinate influence.

That being said, I do not have a ‘strategic’ dog in the fight. Unlike Mearsheimer and Walt, I am not sure that US aid to Israel in 1973 significantly undermined US security in a way that could have been predicted from the White House that October. And, at least on one plausible definition of the national interest, Americans affective identification with Israel might be said to have constructed a US national interest in Israel, broadly defined.