Networking at Conferences: Not Just for Graduate Students and Junior Faculty 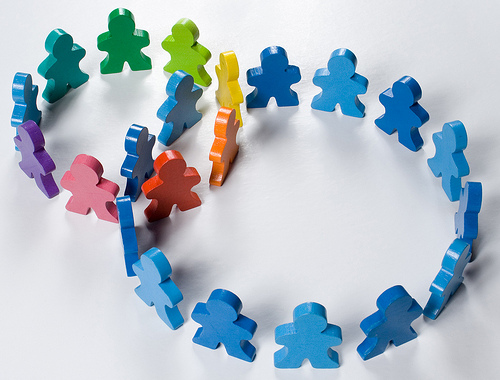 Editor’s Note: This is a guest post by David Lake, who is the Jerri-Ann and Gary E. Jacobs Professor of Social Sciences and Distinguished Professor of Political Science at the University of California, San Diego.

I want to weigh in on “networking at conferences” debate here on the Duck (and elsewhere), some of which has been lost in subsequent controversy.

I agree with the prior posts by Saideman, Nexon, Sjoberg, and others, available here, that networking is less important than good research, and that networking among peers is far more valuable than networking with senior scholars. The most valuable thing you, as a junior scholar, can do at a conference is cultivate a group of peers who share your intellectual interests, who come from sufficiently different intellectual backgrounds (e.g., graduate programs) that you can learn lots of new things from them, and with whom you are personally comfortable and compatible.

Some of my closest and most trusted colleagues are those I met at the first few APSAs I attended. We started off as competitors for “attention” on panels, and ended up as collaborators, commiserators, sometimes colleagues, and in the end, good personal friends. These are the people who will keep you sane in the profession. They will read and comment on your work, share your professional worries and fears, understand the frustrations of balancing career and family, applaud your successes and, yes, cry with you at your failures (I remember one devastatingly bad presentation at an NBER conference from which I would not have recovered were it not for a couple of these good friends also attending and even more bottles of wine). You can’t plan these relationships, nor randomly roam the halls of the hotel looking for them, but be open to possibilities and take risks: ask a fellow panelist to coffee at the conference, follow up on an interesting discussion, and most important collaborate in organizing a panel on your mutual interests for a future conference.

But let me offer a slightly different perspective on networking from the other posts on this topic. Yes, approaching senior scholars is hard. I have done my share of approaching over the years, and recognize the courage it takes to introduce yourself to someone you know only through their writings. Now, more often than not, I’m the senior scholar– at least by age, if not yet self-image – who is being approached. Having been on both sides of these interactions, I recognize they can often (always?) be awkward. You will sometimes get shot down, as I was on numerous occasions. Not every overture will be reciprocated. But some will — and truly rewarding interactions and mutually beneficial intellectual relationships can follow.

The great secret of our professional status hierarchies is that senior scholars welcome – no, need — interactions with younger scholars. Everyone I know in my cohort and above bemoans the increasing distance from younger scholars that seems inevitable with age and time in the profession. It gets harder every year to keep up with all the new and interesting work that is being produced by ever smarter, better trained, and seemingly more prolific younger colleagues. We were all so much better informed about current research trends 20 years ago. In so many cases, we now live off intellectual capital accumulated when time was a bit more plentiful. We need you as much as you need us. “Networking” goes both ways. This is the fact you need to keep in mind when drawing up the nerve to approach any more senior scholar.

What does networking with senior scholars at APSA or any other conference add? Why put yourself through these awkward moments? Let me speak frankly from personal experience here, but with the advantages of age.

First, I’m much more likely to read the conference paper or draft article you send me if I’ve met you in person – not just in a quick handshake in the corridor, but long enough to actually have a conversation about your research. Ask in advance to meet for coffee or a 15 minute chat. Everyone’s conference schedule gets crowded, but brief meet ups are often possible.

Second, remember, senior scholars gossip as much – if not more — than anyone. Meeting a senior scholar and passing the “are you interesting” test means that, at the margin, you are more likely to get invited to visit campus and give a talk, to get invited to a workshop or conference, or something along those lines. As I said, its hard to keep up with the field these days. Even brief but substantive interactions can be memorable. And even if the chat does not result in any direct invitation from me, I’m likely to share opinions with others in my network about who is doing work we should all be (but often aren’t) aware of.

Third, I’m much more likely to agree to write a letter for tenure if I’ve met you, interacted in some meaningful way, and read previously at least some of your work. Writing such reviews is hard, often taking several days of reading, weighing, deliberating, and attempting to craft just the right letter. This summer, I agreed to write more than double the reviews I would have liked, but could not meet every request. I was far more likely to agree to write in cases where I knew the person, even if our interactions had been somewhat limited. In ways large and small, conference networking matters.

To the extent that there are gendered differences in the profession, and I believe they are real and troubling, I think a lot of the problem starts with conference networking. There are layers and layers of stereotypes and gender-biases about women reaching out to men, and especially younger women approaching more senior men. We have to work hard against these invisible but consequential barriers. Senior women, in my experience, tend to be better at promoting their female graduate students – introducing them around, making sure they are acknowledged and included the conversations, and so on. Many established male scholars, among who I would like to count myself, make a special point of reaching out and trying to help promote younger women in the profession. But not everyone is sufficiently sensitive to existing biases and, in any event, whatever we’re doing is clearly not enough. The net effect of enculturated and gendered conference interactions is to reproduce networks that are still male dominated. We then cite what we’ve read or who we know, draw up speaker series or workshops from among the group of bright younger scholars we’ve interacted with in the past, and the vicious circle spins again.

So, yes, reaching out to others at APSA is hard. Social skills are normally distributed across the population. Though self-selected, academics are disproportionately drawn from the lower tail. If we were good at interacting with others, we’d be in customer service, sales, or some career that attracts people who like people. Instead, we have chosen a profession in which we spend a large part of our lives alone, reading, writing, staring out the window waiting for inspiration. But take heart. Since nearly everyone is as socially inept as you, no one will notice! Everyone will be standing around the hotel lobby looking for the same thing you are, but afraid to engage. Take a risk and approach someone you’d like to meet – junior or senior. I can’t guarantee that everyone you approach will welcome you. Some won’t. But many are likely waiting for you to reach out and wishing they could do the same.