The following is a guest-post from Martin Edwards, professor at Seton Hall’s School of Diplomacy and International Relations. Martin’s website is here.

How do Americans think about the United Nations? The results of recent surveys by the Pew Research Global Attitudes Project and the Better World Campaign offer some insights on this question. These organizations have tracked opinions on the United Nations since 2004 and 2009, and the findings are based on random samples of adults and registered voters, respectively. One of the findings in both surveys is that there are partisan differences in the opinions of Americans regarding the United Nations. A finding in the Better World Campaign survey helps us to better understand why these partisan differences exist.

The figure below aggregates the percentage of respondents who view the UN as either “very favorable” or “somewhat favorable” in both surveys over time. Both surveys report an improvement of the UN’s numbers. In the Pew Research survey, the UN’s favorability numbers have gone up ten points since 2007, while the Better World Campaign reports a similar ten point jump since this time last year. 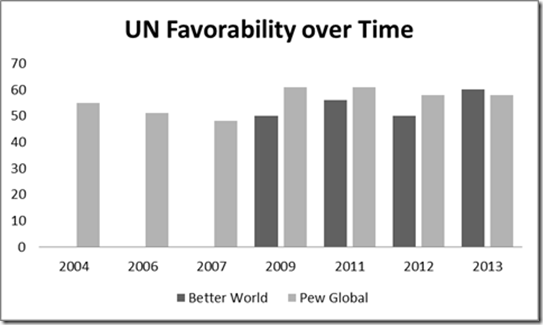 Both surveys also report a partisan divide. This is best illustrated using a chart from the Pew Global Study. 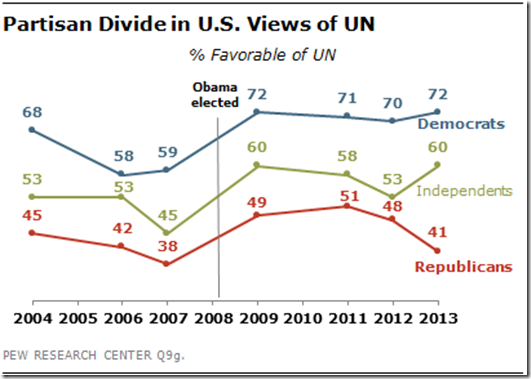 These partisan differences hold when we get past simple favorability ratings as well. In the Better World Campaign survey, registered voters were asked whether the United Nations was still needed or it had outlived its usefulness. The results by party affiliation appear below. A simply chi-square here is statistically significant.

Republican respondents, then, are more than three times as likely as Democrats to say that the UN has outlived its usefulness. This raises an important question: why do these partisan differences exist? Duck contributor Josh Busby and his colleagues have looked at this issue by focusing on elite opinion, and their findings suggest that partisan differences stem from how multilateralism is framed. For Republican elites, multilateralism is fine so long as it generates gains and preserves freedom of action. Democratic elites, by contrast, view multilateralism (and working through international organizations more generally) as a means in itself rather than a means to an end. Republicans and Democrats differ on foreign policy because have different views in how they think multilateral problems should best be solved.

But is this calculation driving mass opinion as well as elite opinion? One way to answer this is to find questions that invite a more nuanced appraisal. The Better World Campaign survey asked the following question: “Thinking about the UN’s support for America’s objectives around the world, would you say the UN has been very supportive, somewhat supportive, not too supportive, or not at all supportive of America’s goals and objectives around the world?” This question is helpful in this regard. If the conjecture of Busby et al. has support, then we would expect to see partisan differences in this question as well. This would suggest that Democrats view the UN as a force multiplier for US interests, and Republicans view it as more of a liability. As shown in the table below, this is indeed the case. A simply chi-square here is statistically significant.

This finding suggests that the same calculation that takes place with elites is going on in public evaluations of the United Nations. Republican respondents were evenly divided on whether the UN supports US goals or hinders them. Democratic respondents, in contrast, saw the UN as a tool to strengthen US interests globally. More work is necessary on this question, and more work on building survey questions that allow us to understand the sources of partisan differences would be a great start.