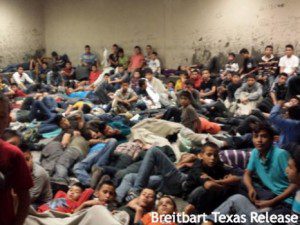 The news of unaccompanied children and teens crossing the U.S. southern border circulated about two weeks ago, causing serious concern to many. The Obama administration announced that more family detention centers will be opened to detain the minors. Family detention centers have long been criticized on legal grounds, as Paul W. Schmidt’s excellent review outlines. Law scholar Anil Kalhan identifies, coercion, due processes violations, mandatory custody, and limited counsel as the most critical issues. An Amnesty International report tracing violations of human rights associated with immigration detention echoes these points.

The administration’s plan to open new facilities lead to a surge in criticism. A Human Rights Watch researcher, Clara Long, noted that immigrant detention facilities are prohibited under international law because they cause harm to children ranging “from anxiety and depression, to long-term cognitive damage.”
So what does the literature tells us about effects of detention on children’s mental health? Research on the mental health of immigrants, refugees, and asylum seekers appears relatively young, as Derrick Silove, Zach Steel and Charles Watters explain in a study  published in 2000. Yet there is increasing evidence that detention takes a toll on the mental health of adult and child immigrants. Porter and Haslam’s (2005) cross-national meta analysis showed that asylum seekers and displaced people experience a host of mental health problems and trauma, controlling for exposure to pre-migration trauma. In a 2006 study conducted with refugees in Australia, Steel et al. have observed that detention increased the risk of PTSD, depression, and mental-health related disability, [and] longer detention was associated with more severe mental disturbance.”
Studies indicate that detention has adverse short and long-term effects on the mental health of children. Steel and colleagues (2004) found that children’s likelihood of mental disorders such as depression, anxiety, and inability to cope increased ten times following detention. Mares et al. (2002) documented that children in detention experienced “dehumanization” and suffered from depression. And because their parents are often traumatized, detained children also lacked proper parental care and protection. Studies examining the mental health of immigrant children in Denmark, Britain, Canada, and the U.S. support these findings. As Robjant, Hassan, and Katona (2009)’s review shows detention not only harmed children’s mental health but also compromised their mental and physical development. Paralleling Lustig et al.’s (2004) findings on child and adolescence refugee mental health, Fazel, Reed, Panter-Brick, and Stein (2012) concluded that psychological and behavioral problems are likely to continue even after immigrant children resettle in the receiving country.
Whether  or not detaining the children crossing our southern border is a necessary evil to address the current crisis, it is critical to extend them a “helping hand.” Importantly, we need to provide them access to clinical care and give them their agency back as Christopher Nugent argues. These children after all are “not a sack of potatoes” to quote Jacqueline Bhadba.
image: Breitbart Texas