Networking "Toxic Remnants of War" on the Disarmament Agenda 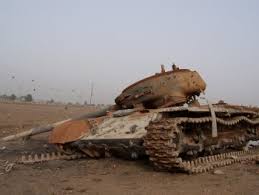 With the United Nations First Committee on Disarmament and International Security convening in New York this month, one point of debate will be the potential health risks of depleted uranium weapons in post-conflict zones. And rightly so: depleted uranium is a byproduct of nuclear enrichment processes used in armor-piercing incendiary projectiles to penetrate tanks, and correspondingly to harden armor against attack. Since the Gulf War, veterans groups, doctors and civil society groups have raised concerns about the possible health effects on humans of radioactive DU dust left in the environment. Now, A10 gunships are headed back to Iraq, a nation that has already absorbed 400,000kg of DU contamination, according to the International Coalition to Ban Uranium Weapons.  This month’s discussion at the UN follows a UNGA report released earlier this year, in which Iraq, not so surprisingly, joined a handful of other nations in calling for an outright ban of these weapons.

Early in my research for my new book ‘Lost’ Causes, I considered depleted uranium as an interesting case of agenda-vetting in the humanitarian disarmament NGO arena. A far-flung network of organizations has been lobbying for a ban since 2003, and language has been percolating in General Assembly First Committee resolutions since 2007, culminating most recently in the Secretary-General’s report on the topic this summer. In short, the issue is gaining momentum in non-binding “soft law.” But the DU issue has not been as prominent to date in disarmament circles of NGOs pushing treaty prohibitions on weapons in general, and major organizations like the International Committee for the Red Cross and Human Rights Watch have not prioritized the issue of DU on their formal agendas. Instead the most prominent issues on the NGO disarmament agenda since 2005 have included cluster munitions, small arms, autonomous weapons and, to a more limited degree, incendiary and explosive weapons. As this graph of NGO campaign affiliations from 2012 shows, organizations associated with the ICBUW are relatively disconnected from other disarmament campaigns, with more ties to the nuclear and environmental movements than to the humanitarian disarmament mainstream.*

In many respects, this is not at all surprising given the nature of the DU issue, which cuts across health, environment and arms control. My research has found that highly inter-sectional issues often have the hardest time finding a foothold in existing advocacy terrain. Also, elite advocacy NGOs gravitate for strategic reasons toward campaigns where they can a) combine testimonial and statistical evidence, and b) identify a clear causal link between the cause and effect of a humanitarian problem. Testimonial evidence is abundant here – much anecdotal evidence points to carcinogenic effects, including increased birth defects in areas exposed to DU. But generalizable scientific evidence is less so: few large-scale epidemiological studies have been carried out.  “We know without a doubt that DU in humans is harmful and that contamination needs to be cleaned-up,” ICBUW Coordinator Doug Weir told me. “The main question is to what extent are civilians being exposed to it.”

Despite these obstacles, in recent years the ICBUW has made some noticeable strides in messaging and networking its issue in transnational civil society.  This is both indicated by and reflected in changing network dynamics: ICBUW advocates are now invited to speak at side events at NGO humanitarian disarmament settings and UN meetings, and bigger, multi-issue disarmament organizations are beginning to develop web content and publish reports on DU. These organizations – like Article36.org, Women’s International League for Peace and Freedom and PAX (formerly IKV Pax Christi) – may not be network “hubs” like Human Rights Watch in terms overall connectedness, but they possess a different kind of network centrality: ties between otherwise disconnected actors across disparate spaces in the disarmament network.

For example, looking just at NGOs with memberships in three or more disarmament campaigns, where node size correlates to number of campaign memberships, you can see below that the Dutch organization then known as IKV Pax Christi (a steering committee member) and UK-based NGO Article36 (a non-member which has nonetheless endorsed the DU issue on its website) have the highest “betweenness centrality” of any organizations in the disarmament arena. WILPF, a long-time member, is close behind. The endorsement of these “brokers” (and especially the active involvement from PAX) is exerting a mainstreaming effect on this previously marginalized issue, increasing the likelihood that the most powerful NGOs – the “hubs” like ICRC and HRW with highest “in-degree centrality” in the network – will pick it up. Weir told me “being able to tap into PAX’s network has made a big difference to networking, issue perception and getting a seat in various rooms.”

Several factors over the past years have helped ensure this more effective marketing of the DU cause in elite disarmament NGO circles. One is the interest of the Norwegian government in the issue, which resulted in an influx of funding to ICBUW in 2009. Over time these resources have enabled the campaign to improve its advocacy savvy. It now has a professional website. It has the money to produce and disseminate slick research reports, like this. And activists like Doug Weir have had the ability to travel to, observe and participate in UN and NGO settings around adjacent issues like cluster munitions. For campaigners new to the UN system, this is a crucial way to develop procedural expertise as well as to develop cross-network friendships, promote information exchange, and learn to speak the same language as like-minded others. These processes had a cumulative effect, strengthening ICBUW’s formerly grassroots resource base in practical as well as symbolic terms. For example, the alliance with PAX allowed the coalition a beachhead for research in Iraq with an NGO that already had a programme there – something they had been unable to muster previously.

But resources aren’t everything. Another important development has been framing strategies of the campaign itself. Previously the campaign sought to focus specifically on banning a specific category of weapons. More recently, ICBUW has adeptly dis-aggregated the DU issue into component parts that connect to other prominent currents in the disarmament arena, creating new synergies. Some of these shifts represent scaling down: DU has become not just a weapons issue but a “transparency” issue; an issue where the “precautionary principle” should apply. These “sub-frames” enable ICBUW’s message to resonate with groups concerned more generally with “reversing the burden of proof” or increasing military accountability for the impact of weapons on civilians.

A separate shift in strategy has involved “scaling up” to a master frame around environmental effects of weapons more generally. Thus, ICBUW and its allies speak now of “toxic remnants of war” as a way to broaden the category of harm of which DU munitions is an example. Philosophically and scientifically, they are drawing connections between civilian harm and environmental damage from a wide variety of conflict and military pollutants. But this maneuver also links DU conceptually to wider, already accepted disarmament discourses.  After all, the idea that states were responsible for explosive “remnants of war” left littering post-conflict zones resulted in an Additional Protocol to the Geneva Conventions, and set the stage for the later Cluster Munitions Convention. The ICRC may not be ready to join a call to ban depleted uranium per se, but according to Weir, the hope is that the “toxic remnants of war” will be viewed as building on the ICRC’s emerging focus on “conflict and the environment.”

If the buzz about DU at the General Assembly this month is any indication, the strategy may be succeeding. And none too soon for civilians in post-conflict zones.

*Many thanks to Alex Montgomery who assisted in converting my campaign affiliation data to these cool pictures using R. For more on betweenness v. indegree centrality in advocacy networks, see our article (with Sirin Duygulu and Anna Rapp).