This week is another NATO ministerial.  What is that?  Here’s a handy guide to the basics and why NATO is run like an academic conference. 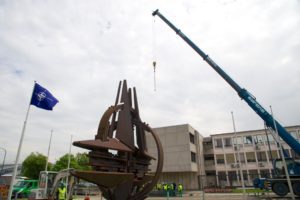 And that is how NATO is like an academic conference–it sets deadlines which then force the actors to finish their papers.  Without regular summits, there would be no focal point and time limit that would force the actors to reach consensus and have some “deliverables.”

The fun part right now is the effort to develop a “persistent” presence as opposed to the “continuous” presence and not quite a “permanent” presence.  The last summit, shortly after things got, um, interesting in Crimea and Ukraine, produced a commitment to exercise regularly to reassure the allies and signal the Russians that if they attacked, they might run into NATO forces.  The Germans and others resist permanent basing, since they see that as a violation of the NATO-Russia Founding Act, which is dead, dead, dead.  Why?  Because the Germans are apparently Neo-Liberal Institutionalists of the Keohanian variety–they don’t want to get rid of institutions that might be handy some day.

This new persistent presence means that NATO will be basing about a brigade worth of troops (which falls short of a division, which might violate the agreement’s restriction against “substantial” basing).  So, four units of about 1,000 each with one in each of the Baltics and one in Poland.  US, Germany, and UK have volunteered and now NATO is casting about for a fourth country to be the leader (or framework nation as goes the NATO jargon).   The effort is proving the quote in my book with David Auerswald: “force generation is begging.”  NATO officals and the US are going around with a cup, begging for contributions.  The first target were the Danes and Norwegians, but they have said no.  Now, the request is being directed at the Canadians, but the hot new government there (here) is far more interested in the UN than in NATO.  So, the Canadians are reluctant, but heaps of pressure is being applied.  The current bet is that the Canadians will provide a smaller force but take a leadership role with much of the troops coming from elsewhere.  The pressure is on because the summit is nearing, and no decision has yet been made.

And, yes, I am pretty jazzed about the Warsaw Summit both because it looks like my desire for a tripwire in the Baltics will be met AND because I got invited to the side-party–a conference taking place at the same time in Warsaw.  My first time at (ok, adjacent to) a NATO summit.  I will have to find my best blue and white clothing.  I will, of course, live tweet and blog as much as I can.

If you have any NATO questions, post them here and I will try to find the answers during my trip to Warsaw in a few weeks.

Steve Saideman is Professor and the Paterson Chair in International Affairs at Carleton University’s Norman Paterson School of International Affairs. He has written The Ties That Divide: Ethnic Politics, Foreign Policy and International Conflict; For Kin or Country: Xenophobia, Nationalism and War (with R. William Ayres); and NATO in Afghanistan: Fighting Together, Fighting Alone (with David Auerswald), and elsewhere on nationalism, ethnic conflict, civil war, and civil-military relations.