Building a Wall Against Populism’s Spread in Europe 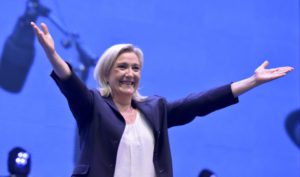 With populism on the march across the West in the past 18 months, conventional wisdom suggests this lurch toward nativism will continue. With the Dutch Trump increasing his seats in parliament, Turkey’s President stuffing the ballot box to win a referendum taking him closer to full on authoritarianism, the National Front’s candidate looking set to get into the second round of Sunday’s French election by exploiting a terrorist attack, and Germany’s long-time leader seeming tired and mounting a lackluster campaign, by most accounts the liberal international order is in for some additional sharp thrusts to the midriff. And what is bad in western Europe, according to a vast army of pundits is appearing even more fragile and vulnerable in east central Europe.

But au contraire, while the LIEO is not exactly alive and well, it remains in place and its upholders stand more than a fighting chance to preserve it in the face of Trump, Brexit, and Russia’s taking the U.S. down a peg. Indeed, not only is western Europe holding the line, but east central Europe is lending a hand in erecting a wall against populism’s surge. Were we to have the opportunity to choose any three countries in the world to hold elections in the midst of all this seeming upheaval we would select the Netherlands, France, and Germany. In essence, we are damn lucky it is this threesome instead of Italy, Slovakia, and Hungary or really just about any other country spanning the globe.

Against all predictions, the Dutch put the first pieces of this wall in sturdy place. Geert Wilders was stymied big time. We knew in advance that the Dutch political system of multi parties and rampant coalition governance would keep him from becoming Prime Minister, but he was widely predicted to get the most votes and augment his party’s representation in parliament considerably. Wrong. The Dutch – like their French and German counterparts – are among the most informed, literate, and savvy in the world. They have watched the supposedly nonbinding Brexit referendum vote and Trump’s rise in horror, and we should actually have expected them to do precisely what they did.

The French are on the cusp of doing the same, again smack in the face of widespread conventional wisdom. Observers seem to forget that the French have a notorious tendency to flirt with “extremists” in the first round of their presidential elections, only to clamor to the center and vote in moderates in the second. Now granted, we are not living in normal times. But the French are not about to traipse down the merry road of nativism; no indeed, they will be the last to allow any Trump effect to take hold in their motherland. In fact, it will be interesting to see how many talking heads begin to grasp that a vibrant “reverse Trump effect” has already taken hold in the West. More than merely doing the right thing, the wondrous French will revel in effectively giving Trump and the little Englanders the finger.

This will happen even without the following missteps by Marine Le Pen:  taking money from Russia, being a loud cheerleader for Trump, having two Nazi sympathizers as top advisors to Le Pen, her own legal troubles, exposures of massive Russian hacking and planting of fake news in France, a wanton attempt to exploit the latest terrorist attack in France, and the list goes on. Astonishingly, landing a haymaker right to the chin of conventional wisdom, even before the first round on Sunday the National Front and she have been slipping in the polls. Au revoir Marine, la Marianne has already won – vive la France !

And God bless the Germans. Not only is Angela Merkel the most powerful and pivotal leader in our unstable world at present, but she is gliding gracefully to victory in a few months time and has nary a thing to worry about. The Germans may not be altogether comfortable now leading the world in addition to leading Europe, but aside from a certain unease due to Germany’s history and the standard passivism in a certain quadrant of the electorate, Germany is about to do the right thing as well and in so doing slot some sizable stones in the wall against the further surge of populism in Europe.

German elites, in particular those in government – Germany has a stellar rank of top tier government ministers and several superb Presidents in a row, not to mention the legendary Chancellor Merkel in the lead – have grown comfortable in the global spotlight. They, following the vaunted lead of former President Gauck, have demonstrated both an interest in playing this crucial role in the world but also some genuine enthusiasm for doing so. German public opinion is not all the way there on playing this more robust and even more militaristic role in the world, but average Germans can absolutely be counted on to keep the Alternative for Germany party far from the levers of power.

Merkel and her colleagues will once again prove the pundits wrong, and get busy taking additional appropriate steps geo-strategically speaking. Case in point was the Chancellor’s impressive aplomb when little Donald wouldn’t even shake her hand in the Oval Office, and oh how she kept her cool when he joked at her expense at the podium and then attacked Germany by tweet a day after she left Washington. As for the German people, inter alia they poll last in Europe when asked whether they have a preference for a “strong leader” i.e. a Trump type. The Germans are in fact “beyond their history”, far beyond it.

Now, the experts are supposedly on more stable ground in decrying the surge further to the east. But not so fast. On one level we have of course observed the democratic setbacks at the hands of the populist leaders of Poland and Hungary, as well as flirtations with Russia and Vladimir Putin’s cult of personality all across the former Soviet satellite states. This part of Europe saw a massive backlash to the arrival of Mideastern refugees after Putin weaponized them in Syria. Despite how against their own national interests to do this actually is, by many appearances eastern Europeans have appeared set to move further into Russia new orbit of influence.

However, it isn’t going to happen. Exhibit A indicates that Putin has overplayed his hand. By militarily threatening the whole of this region’s countries, he has been pushing them right back into the welcome hands of the West. After the evisceration of conventional deterrence in Europe – when the last U.S. administration failed to come to Ukraine’s proper aid – this mistake was compounded in Syria and then again in the flawed European Reassurance Initiative (both version I and version II). Having spent Obama’s first term in Clinton’s State Department and then her campaign, including helping found the campaign’s Russia Group, I opposed in print and in person re-rolling out the security blanket to Europe without negotiating (in advance) full participation of western Europe is forward placing NATO troops and equipment in Poland and the Baltics.

This should have happened well before NATO’s Wales Summit, but after Putin poked the Alliance in the eye by having Russian FSB agents temporarily kidnap an Estonian intelligence operative on the summit’s final day, it didn’t even happen until a year later at its recent Warsaw Summit. Better late than never? Not quite. Deterrence is easy to destroy, and particularly difficult to put back into place – witness how an emboldened Putin has gone to new heights (well, lows) to harm western and specifically core U.S. national security interests. Now that, granted, may be the understatement of the year.

Western governments, starting with our own, made what may be the mistake of the new century by assuming Clinton would win and not taking the fully doable steps to deter and punish Russia for its wide and deep interference in first the Brexit vote and then our own election (the final shoe has yet to drop on our current President’s little Russia problem). Thank the good Lord above that the Dutch/French/Germans are doing his work, and now in the red herring of red herrings we have Trump going rogue on Russia in what of course will be a woefully unsuccessful attempt to wag this dog.

We seem to forget how much of a totally failed president former president George W. Bush was on 9-10. It took the infamous evil a day later, and Karl Rove’s shenanigans, to ensure support from a majority of Americans for five additional years, with fairly negative effects on American well being in the meantime. But the new Administration has even less support not even five months into its tenure in office. Donald J. Trump is even a greater whopper of a cypher president and he isn’t even at the 100 day mark. The historically low ratings are taking a toll on the Donald; who knows, short of being impeached when that shoe does drop, the thinnest of thin-skinned presidents may yet resign out of sheer shame at his failing to be bigly winning all the time.

Meanwhile, viva Bulgaria not to miss mentioning Austria as well, and the Czechs who will also do the right thing. Not a soul on the planet predicted, starting with myself, that the Bulgarian people – notorious for their propensity to view Russia and Putin positively – would chuck their Russophilic leader out of office and vote in a staunch proponent of keeping close ties with the West, both NATO and the EU. Yes, even the Slavic peoples of eastern Europe are ensuring the Trump effect in reverse is the history that will soon be recorded not only by instant historians but also those whose tomes fill all those dusty library shelves.

Thus, the rickety liberal international order may not quite be thriving, but it is assuredly surviving and will one day before long be sturdy again. In the long game Russia will falter and fall back to its normal state in the western dominated world. There will meanwhile be additional instability buffeting the U.S. and the West, starting with the hollowing out of the special relationship between the UK and ourselves. And Trump may even attempt an unnecessary war to ward off his coming political doom; God forbid a terrorist attack at home, for the Steven Bannon we see accurately depicted on Saturday Night Live will surely have an undemocratic field day with his Donald doll.

So those who oppose both the legitimacy and the policies of this administration and its accidental leader must remain vigilant, holding his feet to the fire for each misstep – even if the mother of all marches on Washington is required. When and if it finally gets to that, the smart money is probably on Trump having already retreated to his towering NYC redoubt for good. And none too soon. Most of what he is doing domestically can be fairly easily reversed; but not what he is doing abroad. It is far from clear that Generals Mattis and McMaster can keep the Donald on a leash.

We have surely been cursed to live in interesting times.