Will Moore: A Fierce Friend

Will Moore decided to punch out, as he put it.  He left behind devastated friends, co-authors and students as well as family. I have been trying to put into words how I feel today.

I have known Will since I was a visiting assistant professor long ago.  He and I were part of several workshops aimed at producing an edited volume–the finest one of my career.  His feedback on my work then and his intense desire to produce excellent work were both very helpful as I was just getting going.  Since then, we would chat at most conferences, and recently we started a project together with Johanna Birnir as we desperately needed his methods muscles.  Over the years, I found Will to be quite funny, although he bombed when he tried to be funny at the recent ISA Online Media Caucus reception (Will preferred folks to be honest, so …). 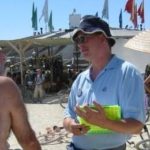 My favorite Will story is when he went to Burning Man, where he fit in politically, one year dressed up as a GOP pollster.  He had guts when it came to stunts like that as he was curious about the reactions, and he got many reactions.

Will was fierce in his pursuit of understanding.  His focus was mostly on the denial of human rights, a topic that could be stressful to study.  His passion for justice carried over into how he acted within the profession.  Will was very protective as he mentored several generations of students.  He would call out injustices in the profession, even if his friends were guilty of only the most mild of offenses.  I felt his sting during the network mess of a couple of years ago, where Will pointed out that it was easy for me to say given my privilege.  I was not too comfortable with that, but I respected Will’s honesty and dedication to improving the profession.  Along with Christian Davenport, Will created a variety of efforts, including the conflict consortium to give students a chance to get feedback. He recently asked me to participate in one of these sessions, but I could not since I would be on the road at the time.

Will was quite flawed, of course.  His own suicide note reflects on the reality that his criticism could be withering.  He was not someone that you would want to be writing tenure letters for you as he might love your work but say enough critical stuff that it would not help your case, and he was aware of that. He was not always an easy colleague to get along with, as he expected everyone to share the intensity of his passion and he was usually pretty convinced about the rightness of his cause even when perhaps things were not so clear.  He had admitted a few years ago that he was on the autism spectrum, but only his suicide note reveals what that really meant in terms of disconnection.  I could only see part of that–that he lacked filters that most of us have.  And he paid a price for that, no doubt.  I just didn’t realize how much of a price.

I guess this is not that atypical in that most (all?) were surprised.  Friends had interacted with Will the past few weeks and did not detect anything different (although some noticed changes over the past few years).  He was clearly working on projects that indicated that he would be around longer than he was.  It is not clear why it happened now as his note only indicates that his kids are now old enough for him to contemplate

He was very Will in how he went about, not just setting up a blog
post to be published after he killed himself but also setting up an
email to go out to his co-authors describing very briefly and very
bluntly what he was doing and that we could either keep his name or drop
it from the publications that will eventually come out of our
co-authorship with him.  Of course, he will remain on our article, if it
ever sees the light of day.

I have known depressed people, but he is the first friend of mine to commit suicide.  I am sure other folks are feeling this far more intensely than I am, as I didn’t see him often–just a couple of times a year.  His students, current and former, must be in significant pain just as those he had longer co-authoring relationships as well as those with whom he went to grad school. I have been rambling here, as I find writing to be therapeutic.  All I do know is that his friends and students should lean on each other.  I am easily reached for those who want to chat.

Perhaps we can learn from this and other similar stories of how difficult depression can be.  For a series of tweets that explain it well, start with the one below and go from there.

Like many other people (incl academics) I go through life with the black dog of depression. #thread https://t.co/6tm8Y53fgq

Feel free to add your own thoughts about Will or your favorite Will stories in the comments.