Why Americans Never Forget to Remember 9/11

As you know, the footage appeared live, as bodies began falling from the flaming and smoke-filled North Tower, as US Airlines Flight 175 was flown into the frame and South Tower at 0903, and as the South and North Towers collapsed at 0959 and 1028 respectively. You know this, because you were watching. You can remember it. Indeed, with Jean Baudrillard referring to ‘the unforgettable incandescence of the images,’ they would be forever burned into the retina of America’s public eye. However, as a visual spectacle consumed in common by the population of bodies comprising the American body politic, 9/11 was also extremely traumatising and it is due to this that 9/11’s memory is particularly vital. 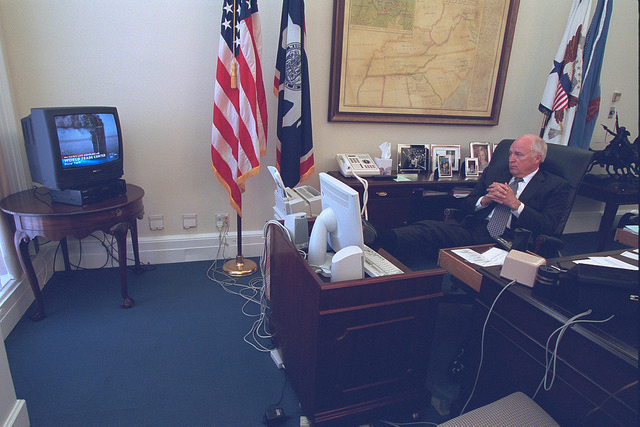 To be traumatised is to be disrupted or damaged, and in disrupting  and damaging American bodies and things, 9/11 not only shocked markets and led to the declaration of a state of emergency, it turned 2,996 people into dust and profoundly affected those comprising the body politic (the American viewing public) who consumed the disturbing news, images, and footage together, in real time. As such, the common experience of trauma produced a ‘felt community’ and began working on 9/11, to move, stick, and bind the population of bodies comprising the American body politic together (hence Sara Ahmed’s comment that ‘the images are repeated, and the repetition seems binding’). However, the communal consumption of 9/11  was not limited to the day itself. Quite the opposite, the American consumption – of the traumatic footage of the flaming and smoking Towers, suicidal jumpers, and buildings’ collapse became habitual and ritual, as the footage and story were repeated again and again, and again. In this way, Americans were (re)traumatised every few minutes for the first few days, every few hours for months afterwards, then every six months and annually.

Monday was 9/11’s 16th anniversary, meaning no-one under the age of 18 will really be able to remember their experience of the day itself. But they don’t have to. As I was flitting between tasks, by just being on Twitter I was reminded to re-view, re-count, re-read – re-member (the opposite of dis-member) – September 11th 2001, minute by minute. I was reminded by @Sept11Memorial to remember the moments Flight 11 struck the North Tower, Flight 93 crashed near Shanksville,  Flight 175 struck the South Tower, Flight 77 struck the Pentagon, the moment the South Tower fell, and then the moment the North Tower fell. In addition, @DHSGov (Homeland Security) reminded me to remember the first responders who perished in the Towers and, as the day drew to a close, @NYPDNews reminded me that silence was required for the remembrance of their fallen heroes, not to mention the civilian victims so highly valorized and commemorated throughout the day.

To return to the title of this post, Americans never forget to remember 9/11 because, in the declaration that ‘none of us will ever forget,’ President Bush not only willed Americans to perpetually ‘encircle the trauma’ but engendered a politics wherein  American being in itself became dependant upon remembering 9/11. The ones who will never forget 9/11 will be American and the ones who forget will not. Remembering or forgetting 9/11 therefore becomes not only a mechanism for setting bodies apart from and/or against one another but an ontological security issue for the American body politic to which the periodic (re)traumatisation of the parts comprising it is so vital.