One of the most predictable elections is just around the corner: even Google has already proclaimed Putin the winner of the presidential race of March 18th 2018 in Russia. The only marginal hiccup for the authorities might be a low turnout, but a couple of viral videos are already scaring the bejesus out of the electorate: if they don’t show up and vote for you-know-who, somebody else will be elected and they will make each family house a gay man in pink pajamas in their apartment!

Surprisingly enough, Putin will have a wee bit of competition on the ballot after all. Pavel Grudinin [I am very tempted to translate his name as ‘boobilicious’], a candidate from the Communist Party, has managed to gain an unexpected amount of support – around 10%. With other candidates polling between a margin of error and about 5%, Grudinin’s rating seems unexpected. The head of the company “Lenin’s Sovkhoz” is popular not just with Russia’s pre-baby-boomers, but also with millennials! And if the Kremlin wants to blame somebody for this, they should be kicking themselves for Grudinin’s success. Millennials like the communist candidate because of governmental idealization of the Soviet past.

END_OF_DOCUMENT_TOKEN_TO_BE_REPLACED

While there is a big debate in the US about the old monuments, Russia is erecting new ones. Starting with the eye sore of a Kalashnikov statue in Moscow that had a bit of a glitch of sporting a German rifle instead of the famous Russian export and finishing with a “monument to manspreading” aka Russian Emperor Alexander the Third in Crimea’s Yalta. While manspreading is a great metaphor for the “Crimea reunification”, let’s put aside the Ukrainian side of the issue and take a closer look at the schmock du jour.

Alexander the Third statue is seated somewhat uncomfortably on what looks like a pile of manure, with his hands on a sword and the words “Russia’s only allies are its army and fleet” engraved on the base of the monument. During the unveiling ceremony that was attended by President Putin, the emperor was lauded as the “Peacemaker” who

END_OF_DOCUMENT_TOKEN_TO_BE_REPLACED

After Donald Trump won the elections in the US, Twitter was abuzz with the picture of potential UN Security Council country leaders that included Theresa May, Donald Trump, Vladimir Putin, Xi Jinping and Marine Le Pen. So now all eyes are on France and its upcoming presidential elections. The possibility of ‘Frexit’ in case of Le Pen’s win is alarming enough, but Russia is also on the agenda. Russian-French relations have been strained since the beginning of the Ukraine crisis, but have got even worse after President Hollande accused Russia of war crimes in Syria that purportedly prompted Vladimir Putin to cancel his trip to France. While in American elections Russia had a clear favorite, and did not really have a plan B for Hillary Clinton’s win, French elections seem to be much more comforting.

In the recently finished primaries on the right, the losing candidate Alain Juppe criticised the winner Francois Fillon for leaning too close to Russia. Fillon did defend Russia’s actions on a number of occasions and even wished for a Putin-Trump alliance. Putin admitted himself that he cultivated a good relationship with Fillon in 2008-2012, probably because they both belong to the J. Mearsheimer’s ‘I don’t give a damn about small countries’ sovereignty’ school of thought. On top of that, Fillon fits well with the conservative turn of the Russian government, being a vocal supporter of la Manif Pour Tous (anti-gay marriage movement in France), whose ‘traditional family’ poster has also been adopted by Russian anti-gay activists.

Marine Le Pen managed to shift Front National further to mainstream by purging some of her father’s most racist friends and allies and settling on a more conventional anti-migrant xenophobia. After all, Nicolas Sarkozy’s government expelled Roma migrants and closed borders way before the refugee crisis. Ms. Le Pen has been a welcome guest in Moscow and received a large loan from a Russia-affiliated bank for her party. Eurosceptic, pro-Trump and anti-NATO, Le Pen would be a perfect partner for Putin and the worst nightmare for the EU. At the same time, Sputnik News, a pro-Russian propaganda outlet, puts Fillon and not Le Pen into their IR dream ménage à trois with Putin and Trump. [dirty joke edited]

END_OF_DOCUMENT_TOKEN_TO_BE_REPLACED

‘I want to ride around Moscow with an American flag in my car. If I find one. Join me! They have earned it‘. If you were wondering who else was celebrating Trump’s win, it was the Editor-in-Chief of Russia Today Margarita Simonyan. Overnight, a deep-seated Russian Anti-Americanism and disbelief in American democracy was turned into almost unending love, although Russian Prime-Minister Medvedev still finds the name ‘Americano’ too unpatriotic for coffee and proposed to rename it into ‘Rusiano’.

The US election results came as a big surprise in Russia as well. According to many sources, most Russian TV talk shows had already prepared panels of ‘experts’ that were supposed to prove how democracy in the US is dead, how the elections were rigged, how American mass media were unfair to Donald Trump and how Clinton cash bought everything. Sound familiar?

END_OF_DOCUMENT_TOKEN_TO_BE_REPLACED

Lots of words have been spilled on this Crimea thing, and so it is reasonable to ask whether our opposition to Crimean self-determination might be more about our feelings about Russia than about secession/irredentism.

END_OF_DOCUMENT_TOKEN_TO_BE_REPLACED

I have a question for all those folks who study elections: any democracy hold an election within a week or two of being announced?

Lots of folks are speculating about what Ukraine/Crimea/Russia is like, including not Abkhazia.  Right now, the analogies that come to mind for me are: coups d’etat and poker.

END_OF_DOCUMENT_TOKEN_TO_BE_REPLACED

Why the Crimea is the Third Rail of International Politics

*this is a guest post by Konstantinos Travlos, currently a Visiting Assistant at Georgia Southern, who writes on international conflict and history.  The arguments presented below are based on past research.

Russian policy towards Ukraine is partly driven by short term political reasons such as protecting an investment in the form of Yanukovych, the Russian view of Ukraine as a “little brother”, a legitimate worry over the future of the Russian minority in Ukraine, and a very real opposition to what is seen by the Kremlin elite as the meddling of Western powers in its Near Abroad. However, I argue that the most intractable issue driving Russia is control of access to the Crimean Peninsula as a naval base, an indivisible territorial issue.  This has less to do with geopolitical and strategic reasons and more to do with the identity of the Russian state as a great power which makes Crimea a transcendental and thus difficult to negotiate over. This is why the recent and quick escalation is not surprising, in counter to some arguments made. 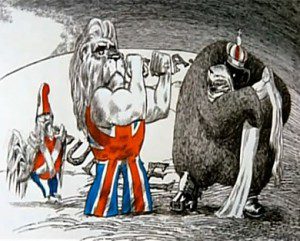