Talk Intel To Me

I remember laughing about an article in The Medium about a TV Sitcom that triggered the downfall of Western Civilization. In case you were wondering, it’s Friends with its “tragic hero” Ross Geller. The author lamented the awful mistreatment of the most cerebral character on the show that signified the harsh embrace of anti-intellectualism in America in the early 2000s. For instance, most of Ross’s academic stories were cut off by his bored friends and audience laughter. Why? Maybe some people would like to know more about sediment flow rate?!

In the age of an amazing accessibility of knowledge, America was conned by a man who disregards the value of science and whose surrogates do not see the difference between facts and feelings. Richard Hofstadter warned about the tendency for anti-intellectualism in the US back in the 60-s, but things seem to have gotten much worse. These days, there is a whole field and a term for deliberate politics of ignorance –  agnotology. It was already obvious on presidential campaign trail: Hillary Clinton was made fun of because she was preparing for debates instead of “winging” them. Academics and professional journalists were scolded (says who?) and college students were derided as snowflakes out of touch with real America. Gagging of scientists and professionals has followed: yes, lock them up in their ivory towers. Agnotology has even born its long-awaited fruit — the by now infamous “alternative facts” euphemism (or is it “euphenism”?).  As one of American bookstores has put it: 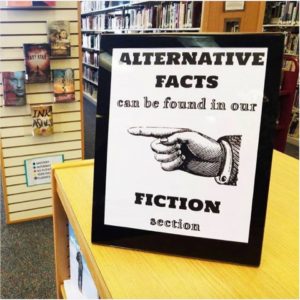