Obama Reveals his Superhero Powers at the UN 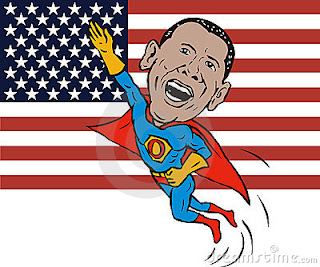 The world has been watching this week as the Palestinian Government prepares to make a bid to the Security Council for recognition as an independent state. Many thought Obama had backed himself into a corner with a statement last year declaring his support for Palestinian statehood. But never fear, the President’s propensity to dilute astute political goals to the point of meaninglessness appears to be limitless. In fact, if Obama was a superhero it is likely that his power would be to retract from lofty political objectives and political commitments at the speed of light. He entices victims with incredible speeches about change, ethics, and possibility and then inflicts disappointment, dissolution and disbelief to all in his realm of influence. In fact, he is SO talented that many victims have fallen into his charming trap more than once.
Many don’t want to see Obama’s dark side. Furthermore, with the scary Big Brother cast of rejects that make up the Republican candidates it becomes easier to hold on to fantasies of Obama’s potential as a good guy.
“He just needs more time, he’s under so much pressure, he inherited such a mess…” yeah yeah, we got it. But this week the President had an opportunity to follow through on his word. To make a politically difficult decision and support Palestinian statehood. Instead of sticking his neck out he gave a rambling UN speech that included a statement likening Palestinian requests for statehood to a ‘shortcut’ and declaring that “peace will not come through statement and a resolution at the UN.” I fell into your trap Obama- again. You got me on guantanamo bay and health care too. But now I see the superpower talent and I’m not going to get caught by your tactics again.