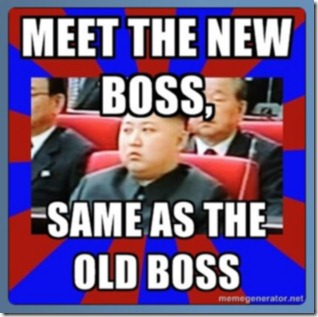 The following short piece for the Korean National Defense University was written after the Leap Day Deal, but before the rocket launch announcement. In the interim, the US has decided to cancel the leap day deal, which is entirely understandable, but a mistake nonetheless I think. NK’s elite has to do something for Kim Il Sung’s 100th birthday this month (the cause of the launch); the regime depends on these sorts of shows. But this is a lot more tame than other possible hijinks, like another clash in the Yellow Sea, could be. Kim Jong Un might be signaling us from within the almost certain, post-Jong Il quiet power struggle now gripping the Pyongyang. For a similar and, I think, persuasive argument, try this. My full text at KNDU can be found here.

Kim Jong Il’s death is more than just the passing of a chief executive; given North Korea’s (NK) hyperpersonalization, it is transformational. As such, Kim Jong Un’s ascent offers a unique opportunity to try engagement once again with NK. It may fail, as it has so often before, but the very fluid new circumstances make it worth a major effort. NK is such a dangerous country and the cold war standoff with SK so severe now, that to pass up this rare window would be a tremendous missed opportunity.

Negotiating with NK has been deeply frustrating for the three democracies (US, SK, Japan) of the Six Party Talks for two decades. Even China clearly finds NK fatiguing at this point. The general consensus is that the Democratic People’s Republic of Korea (DPRK) is not serious about denuclearization, unabashedly lies to interlocutors, and otherwise games negotiations for its own internal interests. Negotiations, at least under Kim Jong Il, seemed an end in themselves for the DPRK. They served the prestige of the regime, by keeping it in the global limelight. They served NK’s state survival, in that every Northern concession could be ‘sold’ for rice, fuel oil, spare parts, and other necessities. Frequently these concessions would then be retrenched under some fatuous circumstance in order to be re-sold again. US officials have noted repeatedly how America ‘will not buy the same horse again’ from NK.

Perhaps most disturbing, the seemingly endless negotiations provided myriad opportunities for NK to ‘shake down’ interlocutors for elite personal comforts like alcohol, HDTVs, and automobiles. Most famously, Kim Jong Il was personally bribed $500M to attend the 2000 inter-Korean summit. In general, the broad public perception among the relevant democracies is strongly negative; negotiations had devolved into a gimmicky venue for NK to ask/demand/blackmail for aid, concessions, and favors. Despite the Sunshine Policy and the 2005 Joint Statement, NK cheated and went nuclear anyway. Hence, aid to NK seemed more like appeasement – leading to ever greater Northern appetites rather than pliability. This is most clear in the SK population’s turn against the Sunshine Policy several years ago, and the Democratic Obama administration’s continuing unwillingness to extend any meaningful, unreciprocated aid (‘strategic patience’). By Kim Jong Il’s death last year, few in the democracies trusted NK to follow through on anything, and there was little interest anywhere in negotiation. Even China seemed unsure what to do with its ‘ally.’
But NK is – or, perhaps, was – a highly autocratic, neo-patrimonial system, in which almost all relevant policy flowed from Kim Jong Il and the tight coterie around him. That means that his death generates enormous uncertainty. In polities with established institutions that exist beyond their rotating office-holders, those institutions provide continuity as personnel change. Institutions are greater than their passing occupants, and future occupants will face precedents and long-established policies and procedures. These constraints prevent wild swings in policy. But in dictatorships, especially extremely personalized and centralized ones like NK, institutions are shallow and corrupted. Power flows not from one’s formal portfolio but one’s personal relationship with the autocratic clique. Hence the irrelevance of the NK presidency and the importance of the otherwise unknown National Defense Commission from which Kim Jong Il choose to rule. Therefore the replacement of a dictator, unlike the death of an elected president, opens huge policy space for change. Kim Jong Il’s death is more than just a chief executive passing; it is the personal-cum-structural transformation of the DPRK.

Hence Kim Jong Il’s death scrambles many of our established expectations of negotiations. It opens dramatic and unanticipated space for talks. This is a unique opportunity to engage NK in search of an alternative to the severe, cold war-style confrontation that has become the Korean norm. The new Kim may not be a Gorbachev, but there is no good reason not to engage as if a break with the past were possible. At worst, if NK falls back on its old, well-known bargaining tricks, the democracies can always retreat to their established confrontational postures. Furthermore, a democratic response to a Kim Jong Un outreach may be an external way to bolster his position against the military and others fearful of change. As Gorbachev parlayed international acclaim into domestic legitimacy to contest reactionary elements in the USSR, Kim may be able to do the same. We just do not know, but the current opportunity is so rare, that it would be a huge missed chance to not make a real effort.

The rest in three days.