If Gays Can Fight, Shouldn’t Women? 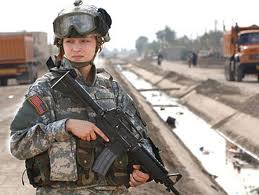 Now that Don’t Ask Don’t Tell (DADT) has been removed, does this mean that women are next on the equality/integration agenda?
The answer to this question seemed to be yes, when this week when the Pentagon announced the removal of restrictions for some 14,000 military jobs that were previously closed to women within the forces due to their proximity to combat. Understandably, there has been a great deal of discussion as to how the removal of DADT could pave the way for the removal of the combat exclusion for women. But are these comparisons between DADT and the combat exclusion for women useful? Below I list 3 ways that the policies are comparable and 3 important ways they are different in hopes of moving the debate further. Here are the similarities:
1. Debates associated with DADT and the combat exclusion have been stuck on cohesion and the potential threat gays and women pose to (heterosexual male) bonding.
2. There has been an element of a ‘morality’ argument in both debates- this idea that gays and women ‘just don’t belong.’ Meaning, they shouldn’t be a part of the military not because of a threat to security, military effectiveness, or job performance, but just because ‘it doesn’t feel right.’
3. Clearly, discussions of the gendered nature of the military as an institution influence both debates. Ideas of masculinity and ‘appropriate’ identity for the forces play a role in how gays and women are understood to be ‘distracting’ from the norm, or diminishing the ‘warrior culture.’

But, there are at least three important ways that DADT differs from the combat exclusion:

1. Perhaps most importantly, while DADT applied across the services and for all positions, the debates about women in the military have been primarily focused on combat units. There is concern about their impact on cohesion- but only for combat roles…somehow we are to believe that non-combat units don’t require the same amount of cohesion.
2. Gays and lesbians have had several vocal advocates within the White House over the years. It was Clinton’s initial commitment to allow gays to serve in the military that resulted in the problematic DADT policy. Obama has also always been clear about his stance on gays and lesbians serving their country. By contrast, support for women in combat has been inconsistent and weak at best amongst those in power in DC. Concerns over sexual abuse scandals, public responses to ‘women in body bags,’ and generalized fear about the impact women could have on the ability of the military to do their job has relegated the combat exclusion a political ‘no go zone.’
3. Unlike the combat exclusion, DADT was never really about an individual’s ability to do their job. Despite contradictory research, there remain claims that women simply ‘don’t measure up’ when it comes to military labor. By contrast, DADT has been more about the individual’s potential impact on group dynamics than his or her ability to accomplish a particular task.

So where does this leave us? Does the removal of DADT and the recent changes to military roles for women give hope to those advocating for the removal of the combat exclusion? Perhaps a closer look at how these policies differ- and the protection of combat units as a last bastion of male only warrior-dom might be a good place to start.