Recently, Joel Pruce and Doutje Lettinga wrote contributions to openGlobalRights that lamented the non-revolutionary, and I would go so far as to say, anti-revolutionary tone that human rights have come to represent in global and local citizen politics. Both observers note the trend that international nongovernmental organizations (INGOs) working on human rights have indeed, become “soft” in their success, earning reproach from critics such as musician-activists Pussy Riot. More harshly, INGOs can be viewed as complicit with state domination. In essence, human rights and the INGOs that fight for them have lost their way.

The fact that human rights are “no longer revolutionary” speaks to the strength of human rights and not their weakness. If we start from just the Universal Declaration of Human Rights of 1948, it has not taken long for largely aspirational, vague notions of what needs to be protected for a life of human dignity to go mainstream into the discourse not just of progressive activists, policymakers, bureaucrats, and academics, but also conservative campaigners, the media, and corporate moguls. As someone who has thought about how international norms take hold, I think the ubiquity of human rights speaks to their strength. It marks the fact that the concept, the possibility, and realization of protecting rights has in fact persevered. No longer the territory of simply “radicals,” human rights have mainstreamed, and this is their point. It is not just for revolutionaries to use, but for everyone else to internalize.

Pruce is right to point out that a whole gamut of unrelated folks are using the term “rights” to characterize their causes. Some of these uses might not be germane to the history of human rights, as when religious or pro-family groups use rights language to try to deny LGBT rights or promote hate speech. But when one says rights “[seem] to stand for nothing at all” because they seem to apply to everyone, instead I see them as very useful to many people to think about the power of their claims. Instead of rejecting rights, they are asserting them. There are certainly wrongful or iffy appropriations of the term “human rights,” but perversely, misuse of the term can demonstrate the power of the idea. Clifford Bob has a fascinating study of the use of rights as weapons, and the deployment of rights language for otherwise nationalist and/or prejudiced causes. We should ask ourselves, why do these people use the term, when they might frame their causes in any number of different ways? Jim Ron and his colleagues have found through surveys in 60 countries that respondents have consistently positive associations with human rights and other causes, and view human rights groups optimistically. For better or for worse, human rights have become the vocabulary for many contemporary global and local movements. 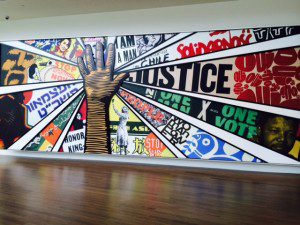 There is no human rights movement, singular. There are human rights movements, and these movements base their causes on the underlying principles of human rights that seek to “go beyond” politics (the “apolitical”) because they are struggling to define the very essence of what it means to be human. But that does not mean the process of defining human rights is apolitical and uncontroversial. Think how far we’ve come: since 1948, the UN has come to support nine additional binding treaties, in addition to just as many optional protocols that mandate supplementary state action to protect human rights. We have expanded our human rights lexicon, and we continue to add to it. Who ever thought digital privacy and Internet access would one day be debated as a human right in the mid-20th century? Or, take the question of weapons of war, once insurmountable to non-state critique. Now, a variety of weapons have come under attack in recent years as folks have explicitly tied human rights concerns to security in a series of campaigns that have resulted in treaties curtailing state behavior: the Ottawa Convention to ban anti-personnel landmines, the Convention on Cluster Munitions, the Arms Trade Treaty, and still ongoing, the Global Zero campaign to ban nuclear weapons. Businesses have seriously begun engaging in questions of corporate social responsibility, through international efforts such as the UN Global Compact, private monitoring efforts such as Goldman Sachs’ Environmental, Social, and Governance Report, the serious rethinking that happened after the tragedy of Rana Plaza, and the call for the private sector to be seen as an alternative source for addressing mass atrocity crimes and other human rights abuses.

I agree that there are claims couched in human rights language that probably should not be. But, human rights don’t belong to anyone; they belong to everyone. Some understandings and uses of human rights will be vapid for some, but incredibly rich for others. Concept stretching happens from both the left and right. For example, endemic poverty certainly violates a whole gamut of human rights, and there is utility to talking about them that way. But fundamentally, they require much more than human rights – there is a limit to talking about poverty as a human rights issue because no lawsuit can possibly completely address the multifaceted causes of poverty. There are concrete concerns, starting with measurement, that show how complex a problem like poverty is. Poverty violates a whole bunch of human rights, but also much much more, and perhaps calling it a human rights concern obfuscates everything else.

A version of this argument is also posted at openGlobalRights.