As IR scholars thinking about the role of nongovernmental organizations (NGOs) in shaping international norms, we rarely think to ask those doing the work on the ground what they think (this author is guilty as charged).  Plenty of work has gone into researching how others NGOs think of one another (Murdie and Davis, Hadden) and try to shape one another’s’ behavior (Deloffre), how international NGOs shape international norms through their work with other political actors (Carpenter, among others), and how NGOs might censor themselves (Bush).  Others have also looked at how external, in particular, Western donors, can shape the NGO-scape in a certain country (Luong and Weinthal, Sundstrom), but very few of us have then thought about where else the money would come from if not from outsiders meddling in the internal politics of state-society relations (see however, Brass, Dupuy et al. for a view of Ethiopia, work by Gugerty and Suarez).

So if it’s bad that NGOs are looking toward the outside to get money, can they look within?  New research from James Ron, Archana Pandya, and David Crow suggests otherwise, at least in human rights.  More specifically, it’s not that NGOs cannot – in fact, in the countries investigated, neither repression nor lack of material resources prohibits human rights NGOs from soliciting donations from domestic sources.  Instead, the authors claim a two-fold process that hinges on beliefs about appropriate donor-recipient behavior.  First, in these countries, there is not a history or custom for donating to NGOs.  Therefore (and second), the fact that NGOs would have to forge a new social path, so to speak, to get domestic money means that they opt for the path of least resistance; that is, the money that is now (and has been) available to “local” and national-level projects that promote human rights and democracy.  In short, no one seems to think that seeking domestic contributions for human rights work is “right.” Furthermore, big name donors, including Western/Northern states, foundations, and international NGOs, have both the interest and the track record for donating to human rights causes, and NGOs have simply looked to those groups for guidance and reward. 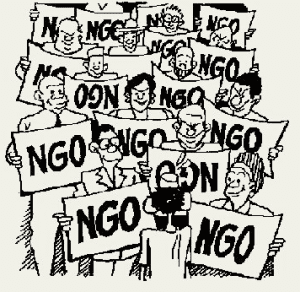 It’s a neat finding that pushes back on critics of big international NGOs that “meddle,” foreign government funding, and general attacks on the effect of outsiders on domestic politics.  It leaves room for those who think that it’s wrong for foreigners to back domestically-oriented projects that affect national politics.  However, it also shows that domestic support is available for human rights but people in those countries don’t know how to show their support, at least financially, and may not want to spend their discretionary funds in that way.  As Maryam points out, this kind of work raises questions about the organizational level in order to fully assess this resource-rights puzzle – though we know broad strokes, it would be great to get down to brass tacks in a particular country and look at more NGOs of the “same kind,” in the “same place.”

More importantly for me, the argument that philanthropy should be the site of future academic inquiry rings quite true.  Since the second half of the 20th century, the Ford Foundation has been making grants abroad for human rights projects that otherwise would not happen. For example, Ford money supported the creation of havens for dissidents in Latin America and the USSR.  In ongoing research with Ron Levi, we find that patterns of human rights-based funding have shaped not just who gets money, but also the professionalization of organizations that seek the money, thereby delineating the field of “human rights NGOs.”

In the early days, Ford stood out as the only game in town.  These days, there’s a proliferation of donors seeking to work with domestic NGOs on human rights-related issues.  Seeking external funding might be the normative behavior for NGOs working on human rights, and this speaks to the content of their work for sure.  Yet, more than before, they also have a variety of funders from which to seek funding, from philanthro-capitalists to ministries of foreign affairs to international NGOs to foundations.  As such, it may be awhile before domestic human rights NGOs move to their local donor bases as the need to do (demand) so is not imminent.  Supply of donors seems also locked into established patterns of behavior, as individuals donate to schools, religious institutions, and other groups, but still benefit from the work of (foreign-funded) human rights advocacy.  Perhaps this is both an account of norms, yes, but also attest to the stability of the market for rights work funding.