This video from Africa for Norway provides a humorous way to think about foreign aid:

END_OF_DOCUMENT_TOKEN_TO_BE_REPLACED

The fourteenth Duck of Minerva podcast features Michael J. Tierney. The bulk of the interview focuses on the TRIP survey and the state of the field of International Relations.

END_OF_DOCUMENT_TOKEN_TO_BE_REPLACED

This year began with a human tragedy of horrific proportions — the earthquake in Haiti. We may never know precisely how many people died, but the government in Port-Au-Prince estimated 230,000 in February.

The news did not improve as the year progressed. Consider this ANI news report from Saturday about flooding in Pakistan — and keep in mind that floodwaters have not yet receded in some areas even though the worst flooding occurred months ago:

It is estimated that the floods affected up to 20 million people, while over 750,000 homes were damaged or destroyed.

The UN had rated it as the greatest humanitarian crisis in recent history, saying that the number of people suffering from the crisis exceeded the combined total in three recent mega disasters – the 2004 Indian Ocean tsunami, the 2005 Kashmir earthquake and the 2010 Haiti earthquake.

In 2011, experts predict that thanks to La Niña, Kenya may well experience a humanitarian emergency. Zimbabwe is on the brink of disaster because of cholera, measles, and flu outbreaks.

Haiti itself is ending the year with a cholera epidemic that has infected 100,000 people and killed nearly 2200 already.

And yet, despite these truly heart-wrenching emergencies, the number of people harmed and killed in them is dwarfed by the ravages of day-to-day poverty of the type described in Paul Collier’s work on the world’s “bottom billion.” A billion people live in abject poverty on $1 a day and roughly another billion live on $2 per day.

In the November/December Washington Monthly, Charles Kenny, a senior fellow at the Center for Global Development, explains that “complex humanitarian emergencies” like the Haitian earthquake and Pakistani floods are not, in fact, the primary source of human suffering worldwide:

[F]ocusing on war, flood, famine, and earthquakes is in itself a selection mechanism. Humanitarian emergencies are thankfully rare, concentrated, and usually short-lived events. Take Africa—often seen as the home stable for the four horsemen of the apocalypse. Less than three-tenths of a percent of the population was affected by famine in the average year between 1990 and 2005. And in 2005, only one-half of 1 percent of the population were refugees.

If tens of millions of people are in need of urgent assistance every year, this still suggests that, however telegenic are humanitarian crises, they don’t represent the biggest challenges of global poverty. More than 16 percent of children born in Africa die before their fifth birthday, for example. Around a billion people worldwide are malnourished….The considerable majority of extreme human suffering occurs outside of what is commonly recognized as a crisis situation.

Kenny explains in that article that humanitarian emergencies are often rightly followed by new emergency assistance — even as development aid to address the endemic problem of global poverty languishes. Thanks partly to the Great Recession, government development assistance is certainly down from peak levels earlier this decade.

Americans like to consider themselves a charitable people — particularly at this time of year. Indeed, Giving USA Foundation reports that Americans give away over $300 billion annually, which is over 2% of GDP. And it amounts to a lot of cash. Jeffrey Sachs has been saying for years that global poverty could be eradicated for about $200 to $250 billion per year.

However, close scrutiny reveals that individual charitable giving by Americans does not typically go to causes that help the global poor — or national poor, for that matter. In the December 6 issue of The Nation, CUNY Graduate Center History Professor David Nasaw asks, “Where does this money go?”

Some to disaster relief or to feed, clothe and shelter the poor—but not very much. Former Labor Secretary Robert Reich claims that only about 10 percent of charitable giving goes to the poor and needy. A third goes to religious organizations; 13 percent to education; 7 percent to hospitals, healthcare organizations and research; 4 percent to arts and culture; 3 percent to international peace and relief efforts; 2 percent to environmental and animal-related causes.

Although it is never easy to quantify giving, closer scrutiny of individual, as opposed to foundation, funding indicates that much of it goes to causes that directly or indirectly benefit the donors. Individual donors are more likely to give to the church or synagogue they or members of their families attend, to their alma maters, their children’s private schools and the museums and cultural institutions they patronize.

I am not sure of the precise NGO or IO targets for charitable giving to alleviate global poverty, but I am certain that this issue should be a higher priority for individual donors like you and me — though Nasaw points out that the 3.1% of Americans earning $200,000 or more annually (or who hold assets above $1 million) give about 70% of the $300 billion US total.

I guess that means we need to convince affluent people to be less selfish in their annual giving.

One last note. Nasaw points out that thanks to the US tax code, “every $100 donated to charity by a high-income person means $35 less to the Treasury.” He is not trying to sound like a Grinch (or perhaps a Scrooge), but if affluent people could not deduct their private donations, the US Treasury would have nearly $75 billion potentially to use in the public interest.

If you are trying to follow the news about Haiti, I recommend reading Mark Leon Goldberg’s UN Dispatch. If you are looking to donate to the relief effort, then check out The Daily Beast’s rundown of NGOs operating effectively in Haiti.

Goldberg and I agree that Reverend Pat Robertson is a fool. Media Matters transcribed his January 13 comments about the Haitian tragedy:

PAT ROBERTSON: And, you know, Kristi, something happened a long time ago in Haiti, and people might not want to talk about it. They were under the heel of the French. You know, Napoleon III and whatever. And they got together and swore a pact to the devil. They said, “We will serve you if you will get us free from the French.” True story. And so, the devil said, “OK, it’s a deal.”

And they kicked the French out. You know, the Haitians revolted and got themselves free. But ever since, they have been cursed by one thing after the other. Desperately poor. That island of Hispaniola is one island. It’s cut down the middle. On the one side is Haiti; on the other side is the Dominican Republic. Dominican Republic is prosperous, healthy, full of resorts, et cetera. Haiti is in desperate poverty. Same island. They need to have and we need to pray for them a great turning to God. And out of this tragedy, I’m optimistic something good may come. But right now, we’re helping the suffering people, and the suffering is unimaginable.

I’ve previously blogged about Robertson’s idiocy, but this latest comment is truly abhorrent given the circumstances. Haitian leaders are estimating between 100,000 and 500,000 dead, but nobody really knows right now. 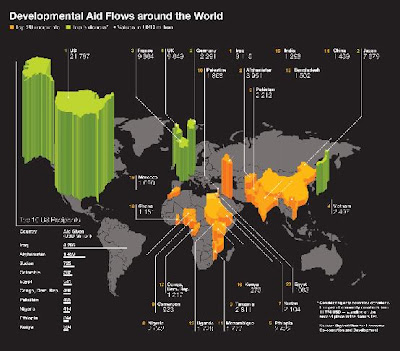 While Forest Whitaker chatted with a refugee, his wife, Keisha, worked a table selling her line of lip gloss, with money going to the IRC. Her top seller: the shade she named Forest.

Whitaker, who arrived directly from the Toronto set of Repossession Mambo, said issue-oriented films remain high on his agenda. In March, he’ll shoot Hurricane Katrina-related The Patriots, to be directed by Tim Story (Fantastic Four).

Shopping for jeans and dresses, Heather Graham said she was disappointed “that our country isn’t doing more for Darfur. Africa’s one of those places that really needs help.”

It’s easy to make light of the glitterati for this self-serving humanitarianism. (For another example, click here.) Celebrities use causes to brand themselves.

Governments do the same thing when they tie foreign aid to official recognition of their beneficence. And whether it is Bono peddling poverty reduction, George Clooney advocating for Darfur, or Leonardo diCaprio condemning conflict diamonds, celebrity sponsorship seems to go hand in hand with public awareness of global issues.

But scholars of humanitarian affairs should be asking: under what conditions are these humanitarian players effective in practical terms, and at what? Is theirs an agenda-setting effect: can the rise of new issues in the transnational primordial soup be traced to celebrity influence? Or do they essentially bandwagon on issues that have already gained prominence? If so does this at least have a catalyzing effect on transforming campaigns into mass movements? Do they exercise power, as Dan Drezner’s recent National Interest piece argues, through social networks of access to policymakers and donors – civic activism plus? Or, is the power of celebrities not their personal crusades but the stories they tell on screen?