Does the Arab Spring show how strategic narratives work?

Nobody has come close to explaining how strategic narratives work in international relations, despite the term being banded about. Monroe Price wrote a great article in the Huffington Post yesterday that moves the debate forward. As I have already written, strategic narratives are state-led projections of a sequence of events and identities, a tool through which political leaders try to give meaning to past, present and future in a way that justifies what they want to do. Getting others at home or abroad to accept or align with your narrative is a way to influence their behaviour. But like soft power, we have not yet demonstrated how strategic narratives work. We are documenting how great powers project narratives about the direction of the international system and their identities within that. We see the investments in public diplomacy and norm-promotion. We have not yet demonstrated that these projections have altered the behaviour of other states or publics. Does the Arab Spring show these narratives at work?

Many leaders in the West and protestors taking part in the Arab Spring promoted a narrative about the spread of freedom, often conflating this with the hope and vigour of youth and emancipatory potential of social media. Of course this narrative may be bogus, as Jean-Marie Guéhenno argues in yesterday’s New York Times. However, the key point Price makes is that narratives set expectations, regardless of their veracity. Narratives defined what NOME leaders were expected to do: step aside! We can see the power of narratives by seeing what happens to those who defy them. Mubarak and Saif Gaddafi both gave speeches where they were expected to align with the narrative. The narrative set the context and expectation for how they should behave. But they did the opposite of what was expected. Price writes:

From a perspective of “strategic narratives,” Mubarak and young Gaddafi were speaking as players in an episode, set by key actors, international and domestic, who had the expectation that their wishes as to the playing out of the drama would be fulfilled. Their speeches did not match the sufficiently accepted script, in the case of Mubarak, or the incomplete outlines of one, as in the case of young Gaddafi.
Who has successfully promoted an overarching narrative? Obama, Cameron, Sarkozy? Where did the ‘Arab Spring’ narrative come from? How does an overarching narrative play out in each country? What room does it leave for individual governments and public to create their own destinies? In the next year, building up to a debate at the International Studies Association (ISA) convention in San Diego in April, we will be exploring this.
Cross posted from: https://newpolcom.rhul.ac.uk/npcu-blog/ 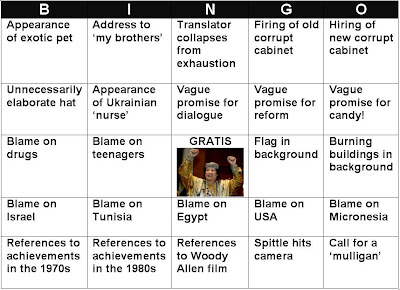 The standard foreign office response in a time of crisis…

Snow day again — I watched Al Jazeera, read up on the current US debates about whether or not (and how) to support the democratic revolution in Egypt, and then turned to watch one of my favorite episodes of Yes Minister, “A Victory for Democracy.”

Classic and informative — on so many levels. The real fun starts at the 4:00 minute mark and runs for the duration:

You can watch the whole episode — parts 1 and 3 here and here. It’s a great break.

We haven’t had much to say about these topics at the Duck. Which is fine, as there are much better academic bloggers to go to for informed commentary (e.g. Marc Lynch, Juan Cole, etc.). But I am struck by this AP story, which suggests Egypt is taking additional efforts to shut down internet communications (more here and here [note: holy &*!!, the whole country appears to be cut off]) as it ramps up its crackdown.

On a more abstract plane, Josh Tucker wrote an interesting post on revolution and revolutionary contagion that approvingly cites Timur Kuran’s influential work on the inevitability of revolutionary surprises.

2) One of the most interesting theoretical pieces I ever read about the collapse of communism was a 1991 World Politics article by Timur Kuran (gated, ungated). In this article, Kuran posits that even people living within a regime that is perched on the edge of collapse may not realize it. The mechanism here is to assume that different people have different thresholds for when they will be willing to publicly oppose the existing regime. Imagine a country with 10 people, one person who will protest if there is at least 1 other protesting, 1 if there are 2 other protesting, 1 if there are 3, etc. It is a stable equilibrium for no one to protest. However, if something happens to put just one person out on the streets (say, a particularly difficult interaction with the authorities, or, hypothetically speaking, an emotional response to someone setting themselves on fire), then suddenly everyone ends up protesting. Person 1 comes out because now there is 1 person on the streets. Once person one comes out, then person 2 comes out because there are 2 people on the street, and onward up the chain. The lesson of the story – in my opinion – is that as long as regimes are repressive and we can assume that citizens have accumulated grievances against the regime, then there is always the possibility that the regime could tumble precipitously.

Kuran published a variation of this argument in a symposium in the American Journal of Sociology on the why-did-we-miss-the-collapse-of-the-USSR issue , which also included a piece by Charles Tilly called “To Explain Political Processes”. In it, Tilly argues that:

This seems to me a very important thing to remember when we turn our analytic vision to unfolding events. For now, however, I find the personal accounts coming over listservs and across the web moving and inspiring. I hope the people of Egypt claim their democratic rights.