WPTPN: Civil Society Resistance in Liberal Democracies in a Time of Rising Non-Accountability

This World Politics in a Time of Populist Nationalism (WPTPN) guest post is written by Dr Cynthia Banham, a University of Queensland Post-Doctoral Fellow at the School of Political Science and International Studies. She is also a Visitor at the School of Regulation and Global Governance (RegNet) at the Australian National University. Her forthcoming book, Liberal Democracies and the Torture of Their Citizens, will be published by Hart Publishing in 2017. She can be reached via e-mail and Twitter. Cynthia would like to thank Professor Susan Sell for her comments on an earlier version of this blog post.

END_OF_DOCUMENT_TOKEN_TO_BE_REPLACED

Australian Prime Minister Julia Gillard stated last Sunday that every Australian child should learn Mandarin, Hindi, or other regional languages as part of Australia’s embrace of the Asian Century.  While her new agenda set out in a 300 page report has received its share of harsh criticism and questions about funding, one  has to admire the audacity of Gillard’s vision of an Australia that seeks to engage Asian states and societies through an appreciation of their languages and cultures rather than insisting on interfacing with English.  This may represent a shift, to invert Bernard S. Cohn’s phrase, from the language of command to the command of language… well, at least if the Australian mindset toward Asia can be shifted in the process.

By way of contrast, America’s supposed “pivot” to Asia continues to lack a serious educational agenda.  As my colleague Robert Kelly has noted, there are still more students studying Latin (205,000) in America’s public schools than Chinese (60,000) — even though the number of students studying Chinese has tripled since 2004.   While the study of Spanish (6.4 million) certainly makes sense in a country where Spanish is spoken by 34 million citizens and most of the Western hemisphere, the continued emphasis on French (1.25 million) and German (395,000) are more questionable, particularly when Chinese is the third most commonly spoken language at home in the United States and French and German are not even in the top ten.  In essence, the emphasis on French and German education is not a reflection of domestic language needs so much as an artifact of a persistent Euro-centrism.

END_OF_DOCUMENT_TOKEN_TO_BE_REPLACED

2011-11-30 / Vikash Yadav / 2 Comments
The term “Indo-Pacific” has been used since the mid-seventies, mainly to refer to a biological ecosystem. In the last few years, however, “Indo-Pacific” has come to describe a set of interrelated maritime security challenges from the East China Sea to the Arabian Sea — particularly as India’s Navy makes forays into the South China Sea and China seeks to protect its supply routes through the Indian Ocean. But the geopolitics brought into focus by this “45 degree tilt” of the map is not restricted to India and China; it also includes the US, Australia, Japan, and the rising powers of Southeast Asia.  As with the notion of “AfPak” that shaped the last decade, India is not the architect of this new cartography that displaces the notion of South Asia as a unified strategic space inherited from the British Raj, but India need not necessarily object to this new imagining. 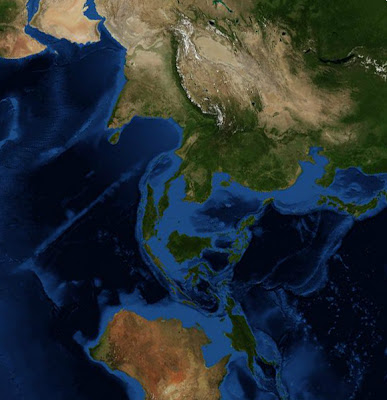 So who is shaping this relatively new conceptualization? The origins of this new focus apparently date back to a 2009 speech by Australian Foreign Minister Kevin Rudd at the Asia Foundation in San Francisco.  (He may have been influenced in part by the recent writing of Robert Kaplan). Rudd argued that in the future, the Indian Ocean would become as central to maritime security thinking and defense planning for powers like the US and Australia as the Pacific is currently.  Essentially, Rudd advocated replacing the notion of  the “Asia-Pacific” theater, which is partly a legacy of WWII and Cold War era strategic thinking, with the concept of “Indo-Pacific” as an integrated theater of operation to focus on emerging security challenges. The new conceptualization anticipates the rise of India as a major naval power — an idea which is sure to flatter New Delhi — and as another counterweight to China.

Rudd’s articulation was also an attempt to persuade the Americans to prioritize long term engagement with Asia (Weekend Australian, 17 September 2011). With no major maritime security threats in the Atlantic, and serious challenges from the Horn of Africa to the Korean peninsula, it is not surprising that the US would agree with Australia’s framing and seek greater engagement with the Indo-Pacific region — a framework which has the added benefits of not being wedded to any existing regional organization and of pivoting at the strategic choke points which are the domain of strong American allies: Singapore and Australia. Hence President Obama’s announcement a couple weeks ago that the US had agreed to deploy 2,500 marines to Darwin, Australia, just south of the Timor Sea. A move that the NY Times called “The first long term expansion of America’s military presence in the Pacific since the end of the Vietnam War.”

A cartographic reorientation on this scale is not something which can be achieved by fiat. It will require regional powers to embrace and integrate this new framing of the map. Indian security elites, for example, have only recently begun to think strategically from an “upside down” map or an “ant hill” perspective of South Asia. The reflexive desire is to prioritize immediate and long-standing security challenges over emerging challenges. And these reflexes may not be ill placed for countries like India and China which have long unsettled borders and a history of conflict (as well as cooperation). Moreover, an overemphasis on the potential for conflict in the Indian Ocean and South China Sea ignores the ways in which Chinese infrastructural investment in Pakistan may help China to circumvent the long sea route for a portion of its imports and exports — although China will still have an interest in new sources of energy off its coast.  There is also the risk of overplaying the growing strength of China while ignoring the ways in which it is also becoming more vulnerable.

Even though India did not invent this new conceptual map, it need not view it in a hostile light. India’s maritime priority will always rest in Indian Ocean, but its ships will increasingly need to move freely outside the Indian Ocean to maintain India’s access to resources and markets. As such, India will benefit from a stable and uniform order that extends well beyond the Straits of Malacca. An Anglophone dominated order in the Indo-Pacific may be more comfortable for India given its regime type, distrust of China, and growing ties with the US and Australia. Expanding ties with other rising powers in the Indo-Pacific that share some of India’s concerns about China is also prudent since America cannot be relied upon to retain its attention in the region over the long term.